Nairab is the first area to be retaken by rebels from pro-government forces advancing in northwestern Syria's Idlib Province.

Syrian rebels have captured the town of Nairab in the northwest of Syria’s Idlib province and are now looking to focus on seizing the strategic town of Saraqeb, Turkish sources told Middle East Eye on Tuesday.

Meanwhile, at least 19 civilians, including eight children, were killed in government air strikes and artillery fire in the area, including on schools in the city of Idlib and the towns of Binnish and Maarat Misrin, the Syrian Observatory for Human Rights said.

Recapturing Nairab is the first significant gain the rebels have made since the start of the offensive in December.

One Turkish official said Ankara was still giving negotiations with Moscow a chance. Russia is backing pro-government forces in the latest round of operations to seize the last rebel enclave in the country.

“But, Syrian rebels would get to Saraqeb, with or without a deal,” an official said, speaking on condition of anonymity.

Saraqeb lies on the M4 and M5 highways, which link cities held by the government and run from Syria’s southern tip near the border with Jordan to the northern border with Turkey.

There are a number of Turkish special forces units in Saraqeb that are encircled by forces allied to the government of Bashar al-Assad.

Turkish President Recep Tayyip Erdogan said in a televised speech on Tuesday that a Russian official delegation would arrive in Ankara on Wednesday to conduct a third round of negotiations on Idlib, which have not borne any results so far.

A seperate Turkish source said that the recapture of Nairab by the forces directly supported by Ankara might be linked to these talks.

“They would like to show Russians that they could change the balance on the field,” the source said.

Turkish presidential Spokesman Ibrahim Kalin said in an interview with CNN on Tuesday that Turkey is intent on holding its military observation points in Idlib and is still maintaining its end of February deadline for government forces to withdraw beyond Ankara’s stations in the province. 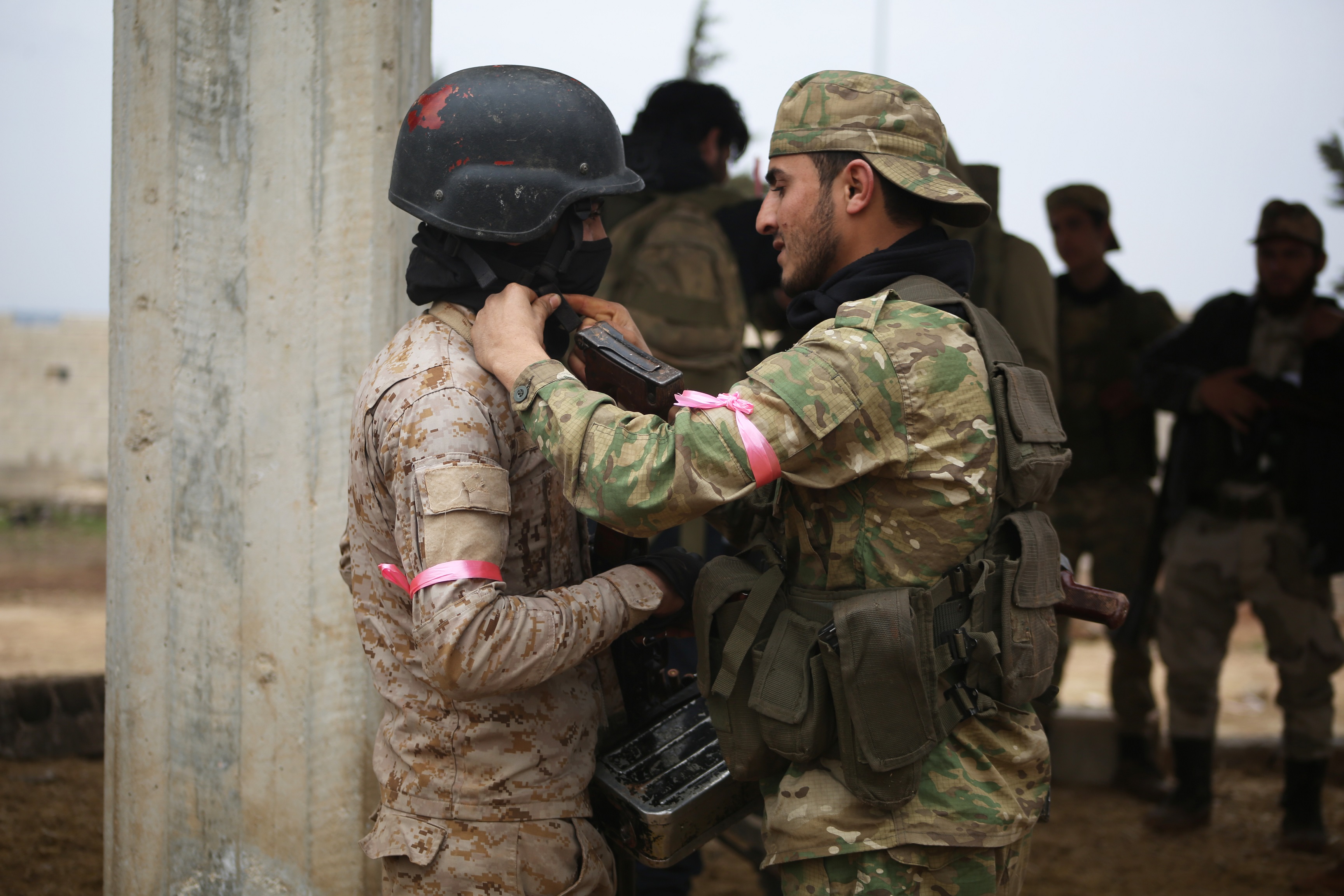 Rebels prepare to launch a military attack to regain control of the town of Nairab, east of Idlib province (MEE/Ali Haj Suleiman)

Over 900,000 civilians have been displaced since 1 December by the government offensive, according to data released by the United Nations last Friday.

Erdogan, on the other hand, continues to directly criticise Russia over its support for Damascus.

“Russia is aiding the regime at the highest levels and maintaining its air support,” the Turkish president said. “We aren’t compelled but doomed to be in this fight. Are we going to be sitting ducks while up to three million refugees are loading up on our borders?”

Erdogan said a summit with Russian leader Vladimir Putin was planned for 5 March.

French and German leaders were initially expected to attend but the Russians have objected to such a meeting.

“There is no full agreement yet between Macron, Merkel, and Putin,” he said. French President Emmanuel Macron and German Chancellor Angela Merkel have both urged Putin to end the conflict, concerned about the humanitarian situation.

The Turkish official said the rebel ground offensive was expected to continue.

“It will slowly intensify but it would be best if both sides could reach a deal,” the official said.