Syrian families who have fled the Syrian Government and Russian airstrikes are now seeking shelter in olive groves near the Syrian-Turkish border.

Families who fled the Syrian government and Russian strikes in northwestern Syria are sleeping in an olive grove near he Turkish border without enough food and no place else to go.

They are some of the 180,000 people who have escaped an upsurge in violence in the last militant bastion in the last few weeks. It marks the most intense escalation between President Bashar al-Assad and militants factions since last summer, with dozens killed in the shelling in northwestern Syria.

“The house fell in over my children and grandchildren at night … but God saved them, they emerged from the rubble,” said a 70-year-old woman who gave her name as Aziza as she spoke under the shade of an olive tree.

Aziza’s family is one of the scores who fled targeted parts of southern Idlib and northern Hama province and are now living in the olive groves at the Turkish border. There is no room for them at the nearby camp for the displaced in the town of Atmeh.

Aziza fled her town of Kfar Nabuda with 17 relatives nearly two weeks ago, taking nothing with her, as the warplanes flew overhead. The exodus has left many towns and villages empty. 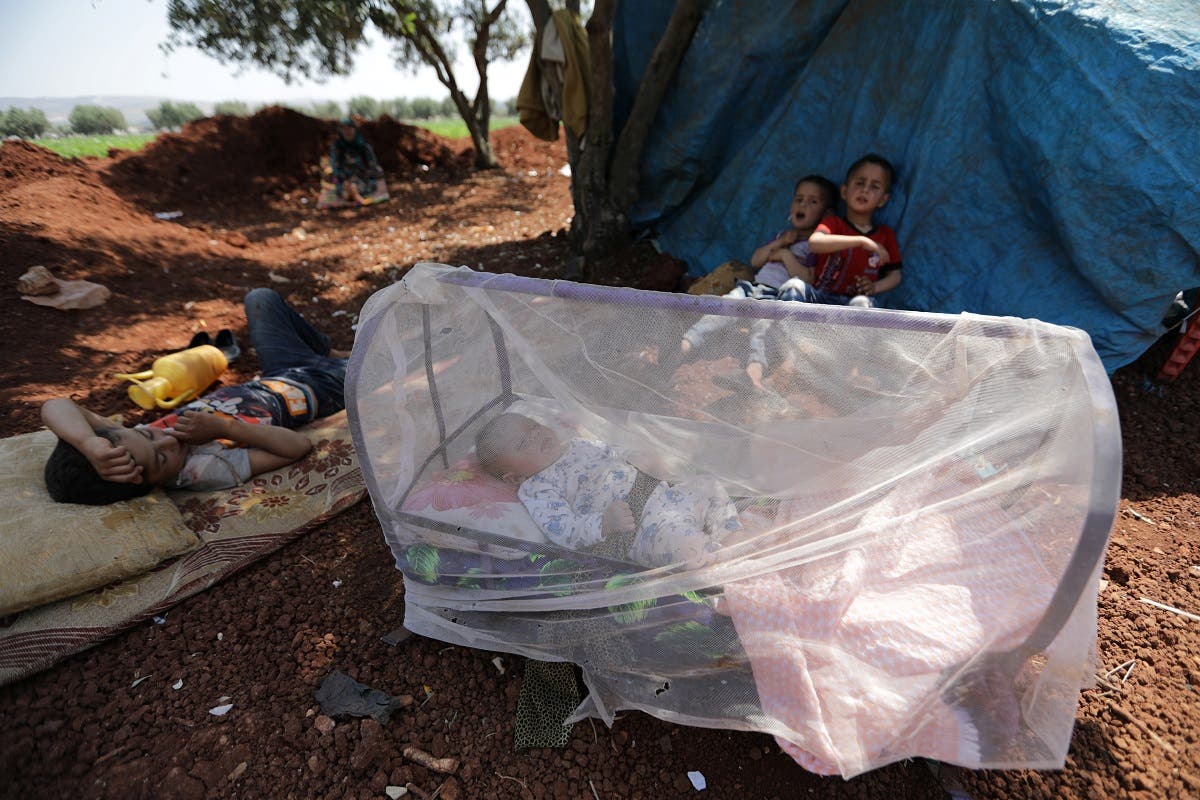 A displaced Syrian baby sleeps in a bed covered with a mosquito net in an olive grove at Atmeh town, Idlib province, Syria May 15, 2019. (Reuters)

Some have made makeshift tents by stringing sheets between the olive trees. Infants sleep under mosquito nets suspended from the branches. One of the shelters was equipped with a kitchen stove.

Tahrir al-Sham, which includes the Qaeda-linked group formerly known as Nusra Front, is the dominant militant faction in the northwest. Militants launched a counterattack this week to counter ground advances by Syrian government forces.

“Aerial bombardment, including the reported use of barrel bombs causing severe damage to civilian infrastructures and civilian casualties, is a war practice which goes against every single humanitarian principle,” she said.

Medical charity UOSSM said the Tarmala Maternity and Children’s Hospital was destroyed by an air strike on Wednesday, but there were no casualties as it had been evacuated. The Syrian government says it is responding to attacks by Qaeda-linked militants.

Much of the bombardment has hit a buffer zone agreed in September under a Russian-Turkish deal that spared the region and its 3 million residents from a full-blown assault.

Ankara, which backs some militant groups, has deployed forces into the region in agreement with Russia. They are stationed at a dozen positions, one of which was hit by shelling from Syrian government territory.

Turkey has called on the Syrian government to stop the attacks. Still, Abu Abdo al-Khani said Ankara’s deal with Moscow had failed to help his family.

“We were supposed to be within the secure zone, where is it?” Khani, 30, said. “Where are (Turkish President) Erdogan and his guarantees to protect us?”

Khani’s family fled the town of Khan Sheikhoun on foot through the countryside. He said they had received some blankets and water in the olive field. “We haven’t showered in 15 days … We’re living under the trees at the border, who would accept such a life?”