Residents Of Idlib: 'Your Indifference Is Our Death Sentence'

As the Syrian Government forces continues to close in on them, residents of Idlib ask if the world will just stand aside and watch.

“The hardest part is not knowing where to go,” says Ahlam, who asked that her full name not be used. “People are fleeing the bombing, but they are going nowhere.”

“When you ask people on the road where they are going, nobody knows. They just know that there are no safe places anymore, so it is better to keep moving.” Her voice is strong but laced with exhaustion.

Ahlam coordinates humanitarian support for World Vision Syria in the country’s northwest Idlib province. She has just returned from her shift distributing bread in the basements of buildings in the countryside west of Aleppo, in areas not yet reached by Syrian government forces.

In one, she found 20 families trying to shelter together from the bombings. “All the families are in one room, there is no food, no toilets,” she says. “There were more than 25 children there, so when we heard of the situation, we knew we must try to help.” 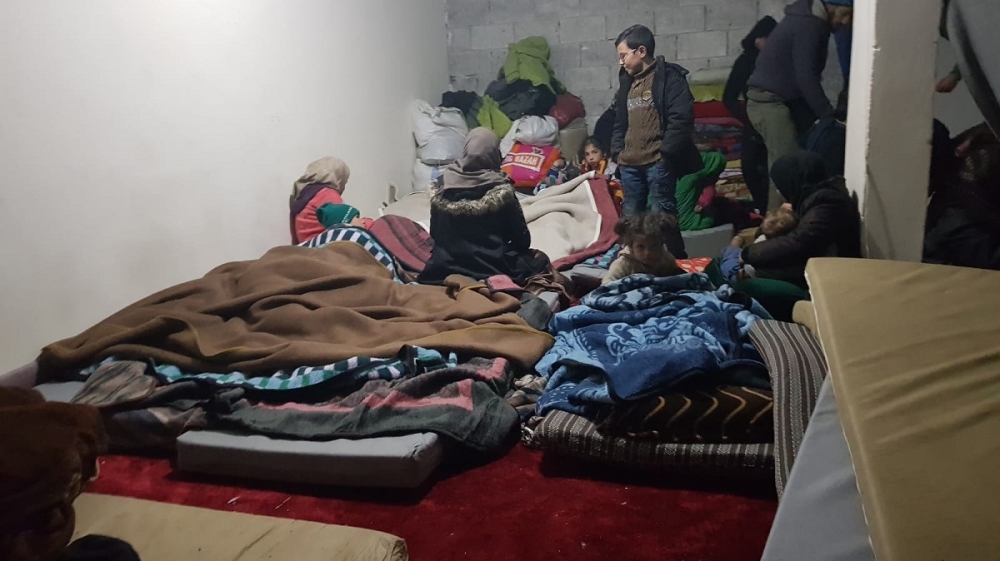 ‘Children are freezing to death’
Ahlam has remained in Idlib province throughout Syria’s war. Last week, she witnessed the Syrian army entering her town, Maaret al-Numan, which is located on the M5 motorway connecting Aleppo to Damascus. Both a strategic location and one of the symbolic centres of the anti-regime protests, it was the first time the army entered the town since opposition fighters overthrew them in 2012. She says she has never seen the situation as desperate as it is now.

Since December 2019, the Syrian government has renewed its military operations to take over the last opposition stronghold, shelling Idlib’s countryside with the backing of Russian air raids. The United Nations has reported that more than 800,000 people have been displaced in the last two months; 143,000 of them in the last week alone. They are heading towards the closed Turkish border.

“People are sleeping in cars on the side of the road, or under trees,” Ahlam says. “Children are literally freezing to death.”

With night temperatures dropping below zero and tents covered in snow, many have nothing to warm themselves with but rubbish and old clothes – sometimes with tragic consequences.

On February 11, Mustafa, his wife Amoun, their daughter Huda and their three-year-old granddaughter, Hoor, were found dead in the village of Killi, poisoned by carbon monoxide. Mustafa had brought a gas heater inside their makeshift tent, in a desperate attempt to keep his family warm.

Just two days later, on February 13, people in Idlib started sharing a picture of one-and-a-half-year-old Iman Mahmoud Laila on their Facebook pages. She had died as her father was carrying her to Shefaa Hospital in Afrin. When he noticed Iman was having trouble breathing, her father had wrapped her in blankets and strapped her to his body, hoping to keep her warm.

He walked for two hours from his shelter near M’a’rata where he had gone when he fled Russian and Syrian bombing in Eastern Ghouta. When he arrived at the hospital, Iman had been dead for at least an hour. The doctors said she had frozen to death.

‘We have been left alone by the world’
“I have just witnessed a woman giving birth in a car on the highway. The hospitals have been bombed and there are no doctors around,” Ahlam says.

An attack two weeks ago on the public hospital in Ariha left the areas of Maaret al-Numan, Ariha and Sarqib without an operating medical facility. In January, 53 health facilities had to stop their work due to bombardment, evacuations or mass displacement of residents.

“Every time we open any small medical point or health centre, it is directly targeted by Russian and regime warplanes,” explains Dr Munzer Khalil, head of medical services in the opposition-held areas of Idlib province. Evidence gathered by Physicians for Human Rights and the Syrian Observatory for Human Rights (SOHR) since the operation in Idlib began support claims that the Syrian government has been deliberately bombing hospitals.

Refugee camps are no safer from the bombings. Over the weekend, al-Ezz camp on the outskirts of Sarmada was bombed, injuring three people and causing all its residents to flee. Of the few aid organisations left in Idlib, all are out of funds while also facing huge risks. “I have to stay strong to give people strength,” Ahlam explains. “But all of us here are tired and helpless. We have been left alone by the world.”

Raeifa, who also asked that her full name not be used, is the operations manager at the women-run organisation Bareket Amal – meaning “glimpse of hope” – in Idlib. “If there is an international community out there, this is the time to show its face,” she says. “The regime and the Russians believe they can take the whole of Syria back because the world will stand aside and just look. The world’s indifference is the regime’s strongest weapon.”

Raeifa was a member of Idlib province’s local council from 2012 to 2015 and has travelled on many occasions to the United States and Europe, but decided to stay as close as possible to Idlib.

Bareket Amal was set up to raise cultural and political awareness among women and young girls. “We used to set up workshops to educate the girls in Idlib on what the Syria of tomorrow could look like, studying the history of Syria and its constitutional process, and the support continues by establishing WhatsApp groups to follow up what was achieved in these workshops.”

But as the situation deteriorated, the funds initially set aside for running the organisation were used instead to help people survive. “We stopped our political work training the community and focused on much-needed humanitarian relief,” explains Raeifa. “We opened up our headquarters, so displaced women could come and wash themselves and their clothes. Many were staying in communal places like the mosques, and even there they had no access to bathrooms or clean water.”

She is currently on the Turkish side of the border with Syria but contacts people in Idlib regularly, as all her family live there. “Part of my family lives in the area that got shelled three days ago,” she says. “My sister called me to tell me that nine people had died, but thanked God her husband and my two nephews were safe.” 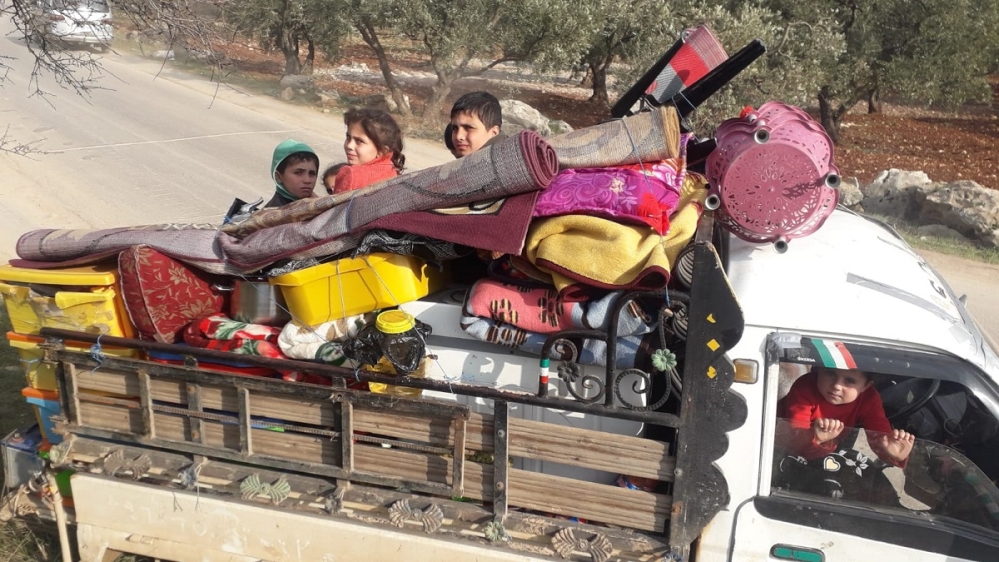 Civilians in Idlib city have not yet started to flee en masse, but if they do, the humanitarian toll will be unimaginable, says Raeifa. “There are approximately 1.2 million people in the city of Idlib, as many came from Saraqib and Maaret after those villages were taken by the regime. If the intense shelling they experienced there is going to start in Idlib too, there won’t be any way of preventing a catastrophic mass movement of civilians.”

The Syrian government says it is justified in pursuing “terrorists” it claims are hiding in rebel-held areas in Syria. “The coalition supporting the regime are repeating the lie that they are bombing Idlib to free civilians,” says Raeifa.

“If they wanted to free us from the terrorists they claim are hiding in Idlib, how can they explain that out of 585,000 people moving away from the front lines, nearly no one has decided to voluntarily return towards regime-controlled areas?”

People trapped inside Idlib province have very little news of what is happening. “My sister, family and other people in Idlib call me every day, asking for information about the situation, if I know what areas has the regime reached, if they are closing in on them. Nobody here trusts the regime or their Russian and Iranian allies,” Raefia says.

‘Come to Idlib. Come see with your eyes’
The violence that took place during the recapturing of Maaret al-Numan remains fresh in peoples’ memories.

Raeifa barely pauses for a breath as she recounts some of the stories of atrocities she has heard.

“If the Syrian army was here to liberate us from terrorist jihadists, why is nobody staying there when the soldiers arrive?” Raeifa asks.

In the past nine years of war in Syria, the number of internally displaced people inside Syria has remained higher than the number of refugees fleeing elsewhere – of whom most have gone to Turkey, Lebanon and Jordan.

“We thank all of those who are asking Turkey to open its borders and let us in,” Raeifa says. “But ultimately we don’t want to go anywhere. We want to return to our homes, we want this war to end and we want to protect civilians from the regime forces.”

Her words echo the appeal from medics and doctors in Idlib over the past weeks to the representatives who came together last weekend at the International Security Conference in Munich, and to Antonio Gutierrez, head of the UN: “Come to Idlib. Come see with your eyes what is happening here,” she says.

“To the UN Security Council I want to say this: come see for yourself if the death and killings happening in Idlib are because of terrorism or rather [from bombs] falling from the sky.”