The people who built the spectacle and spirit of Tahrir Square and other protest sites, through hip hop, poetry and Shia iconography, and indeed Iraqis in general, deserve better.

Baghdad’s “Turkish restaurant” – the 14-story building that sits next to the epicentre of Iraq’s protest movement, Tahrir Square – is a sight to behold. The building was occupied by protestors in mid-October and has since turned into an icon of Iraq’s unprecedented protest movement.

Draped in nationalistic slogans and Iraqi flags, it is certainly a photogenic and easily identifiable symbol: in Tahrir Square miniature models of the Turkish restaurant mark memorial sites to the fallen and the building’s facade is reproduced in the form of artwork, keychains and other trinkets and decorative items.

Is it a revolution?
There is much discussion on Iraqi social media and among protesters about whether or not what is happening in Iraq should be called a revolution.

Predictably the debates often reflect the divide between the more enamoured protest sympathisers on the one hand and, on the other, those who are either more reserved in their support or outright detractors.

Having visited Tahrir Square several times over the last two weeks, one thing is beyond doubt: even if the current movement fails to achieve a political revolution (more on that below) and even if it is not a revolution, it is undoubtedly a revolutionary movement that has already achieved a cultural revolution.

Unlike neighbouring Khulani Square and Sinak Bridge, where violence is more common and the dominant feeling is one of confrontation, the atmosphere in Tahrir Square is carnivalesque. On display is an explosion of cultural, political and intellectual expression and creativity.

The contrast between the festive climate of positivity and the grave and bloody circumstances that birthed it can be jarring. 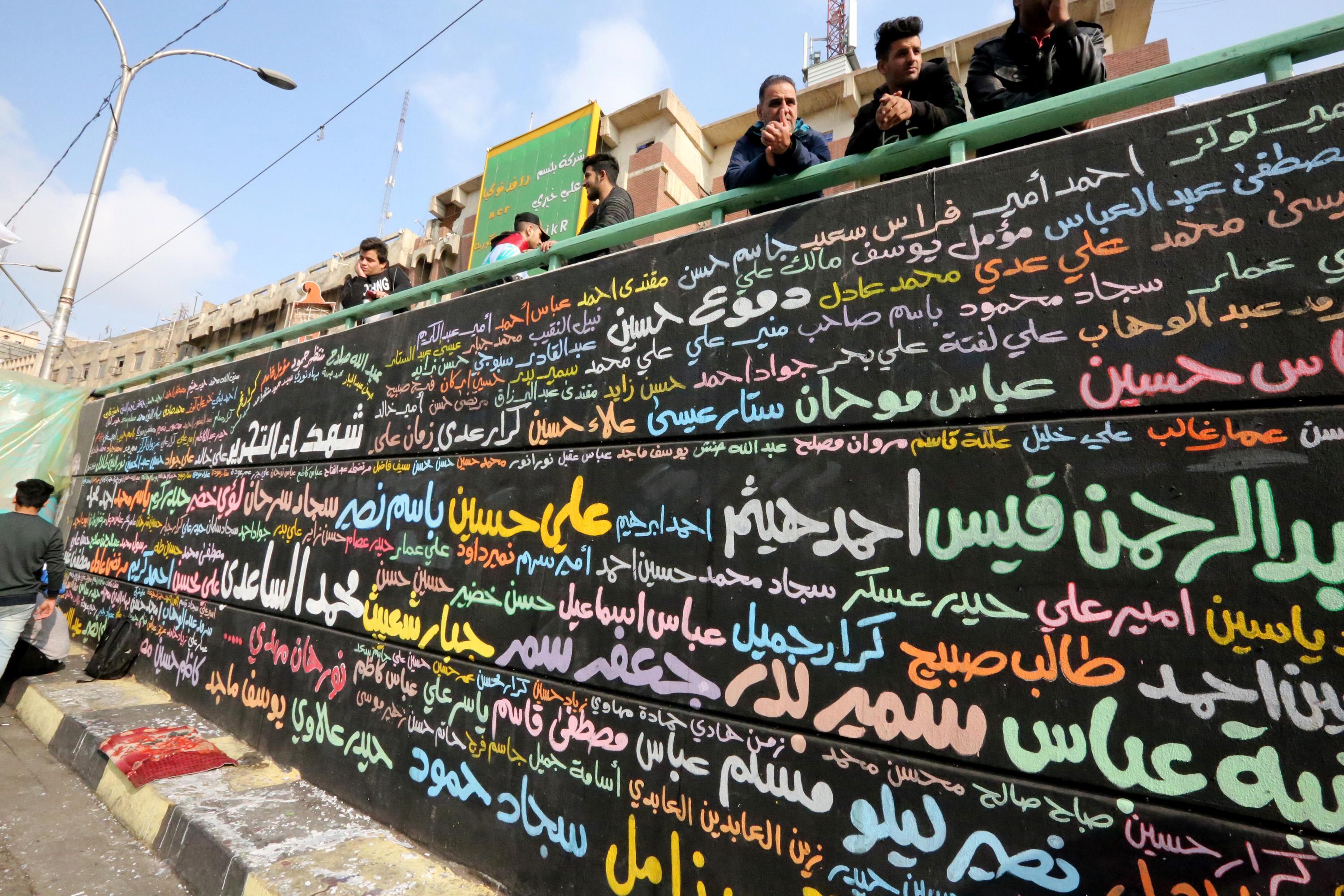 Amidst a forest of tents blaring everything from hip hop to poetry to Shia mourning recitations, reminders of why Iraqis have taken to the streets, and at what cost, abound in the form of pictures, murals, memorials, prayer meetings and other forms of commemoration dedicated to the young men who lost their lives over the course of the past two months of mass mobilisation.

The flourish of expression that is on display is significant far beyond its considerable artistic merit. More than just a pleasing display or a suitable backdrop for selfies, the cultural output of Tahrir Square and the round-the-clock grassroots effort that goes into sustaining its occupation reflect the contours of an emergent political culture divorced from the Baath era and the early post-2003 years.

Between US and Iran
Beyond their obvious anti-systemic drivers, the protests cannot be reduced to any single leaning or ideology.

As if to underline the point, while gazing at a mural proclaiming “America go out of Iraq” complete with a depiction of an American dagger bleeding Iraq dry, a looped recording of a voice chanting “Iraq is under Iranian occupation” can be heard. Tahrir Square reflects a cross-section of political orientations, religious convictions, classes and age groups.

The bulk of people in Tahrir Square are clearly young men from the impoverished neighbourhoods of Baghdad such as Sadr City. But this in itself is reflective of the demographic composition of the capital: it is majority young and majority poor.

The innumerable tents that dot the protest area are similarly reflective of the diversity of Iraqi society. On any given day Tahrir Square is home to everything from civic activism to musical events to tribal processions to religious rituals.

The culture of solidarity, inclusivity and self-help that has sustained Tahrir Square is itself a major achievement.

The infrastructure of mobilisation, grassroots service provision and charity normally associated with Shia mass rituals around Ashura and Arbaeen have been enlisted in the service of a civic movement intent on indefinitely occupying public space with the aim of forcing systemic change.

This goes far beyond active participants or those physically present in Tahrir.

Shia mobilisation
Donation boxes have been set up by businesses across Baghdad and Iraqis from all walks of life provide what they can to protestors – from blankets to food to money. Even some of the wealthy business classes have taken to funding provisions and supporting Tahrir’s protest infrastructure.

Beneficiaries and practitioners of corruption have also come to resent the uprising’s corrosive effect on their interests and the day-to-day running of their businesses. 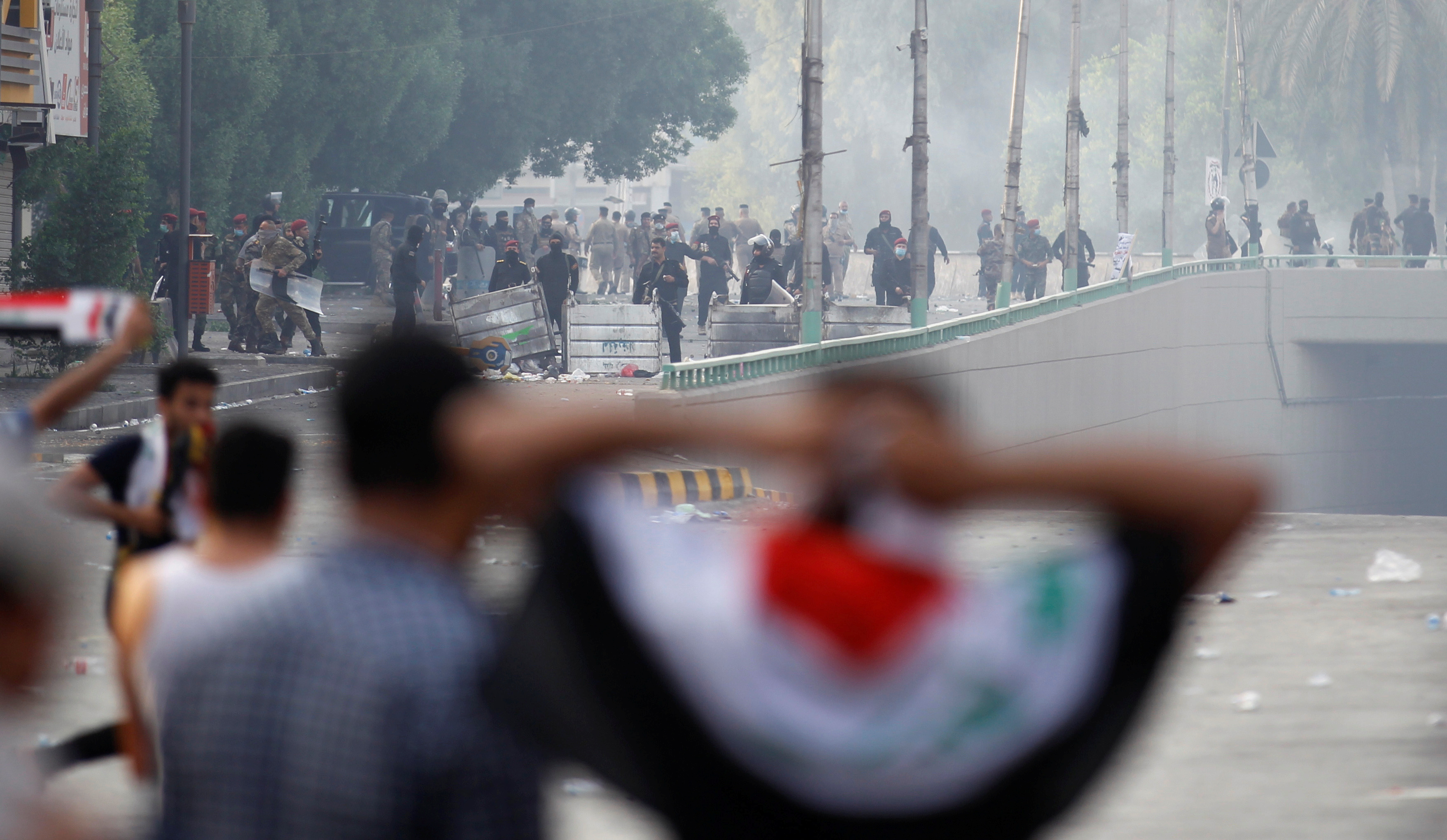 Demonstrators disperse as Iraqi Security forces use tear gas during a protest against government corruption amid dissatisfaction at lack of jobs and services at Tahrir square in Baghdad, Iraq October 1, 2019 (Reuters)

The ongoing protests have come at a time when Iraqi politics have widely been perceived as having moved beyond the prism of sectarian identity and sectarian competition. This does not mean that sectarian identity has disappeared and Tahrir Square is not short on Shia iconography: from pictures of Grand Ayatollah Ali al-Sistani to mourning processions to images of the Shia imams and the very banners that were once condemned as offensive “sectarian banners”.

Of course the key is the vastly differing context. Where a banner proclaiming “ya Hussain” or depicting an image of the imams was once a form of identity assertion in the midst of sect-coded conflict, today these are talismans in a context of trans-sectarian solidarity against a widely reviled political system.

Shia mobilisation today reflects the generational changes and the transformation of Iraqi Shia political identity across three stages. In 2003 there was the perceived imperative of realising the decades’ old dream of “Shia rule”. Rather than a detailed blueprint, this offered little beyond the twin pillars of Shia political sect-centricity: victimhood and entitlement – the political marginalisation of “the majority” and their entitlement to political power.

How this power was to be exercised, by whom and to what end were questions that were seldom asked and never answered. The realisation of the dream was all that mattered.

Once the dream was realised, the second stage was the need to defend the gains made after 2003. As late as 2014 Shia-centric actors were able to scare enough Shias with the spectre of a Baathist return on the back of domestic and transnational anti-Shia conspiracies.

The dream, though realised, remained fragile and many of the sect-coded complexes of the late Baath and early post-2003 eras continued to resonate with significant sections of Shia public opinion.

However, and particularly since the war against the Islamic State group (IS), the concept of “Shia rule”, having moved from a dream to be realised to a precariously held gain to be defended, was now a secure reality that offered little beyond the deflated prism of sectarian identity.

In addition to the altered regional and domestic security environments and the readjusted balance of power between sect-centric actors, there was a generational issue at work.

Major achievements
For the generation of Shias that dominate the protest sites today, “Shia rule” is neither a dream to be realised nor a precarious gain to be defended. Rather, it is the only reality they have known.

Unlike older generations, this generation does not judge their socio-political horizons in juxtaposition to the Baath era but in relation to the bitter socio-economic realities that confront the vast majority of Iraqis today. 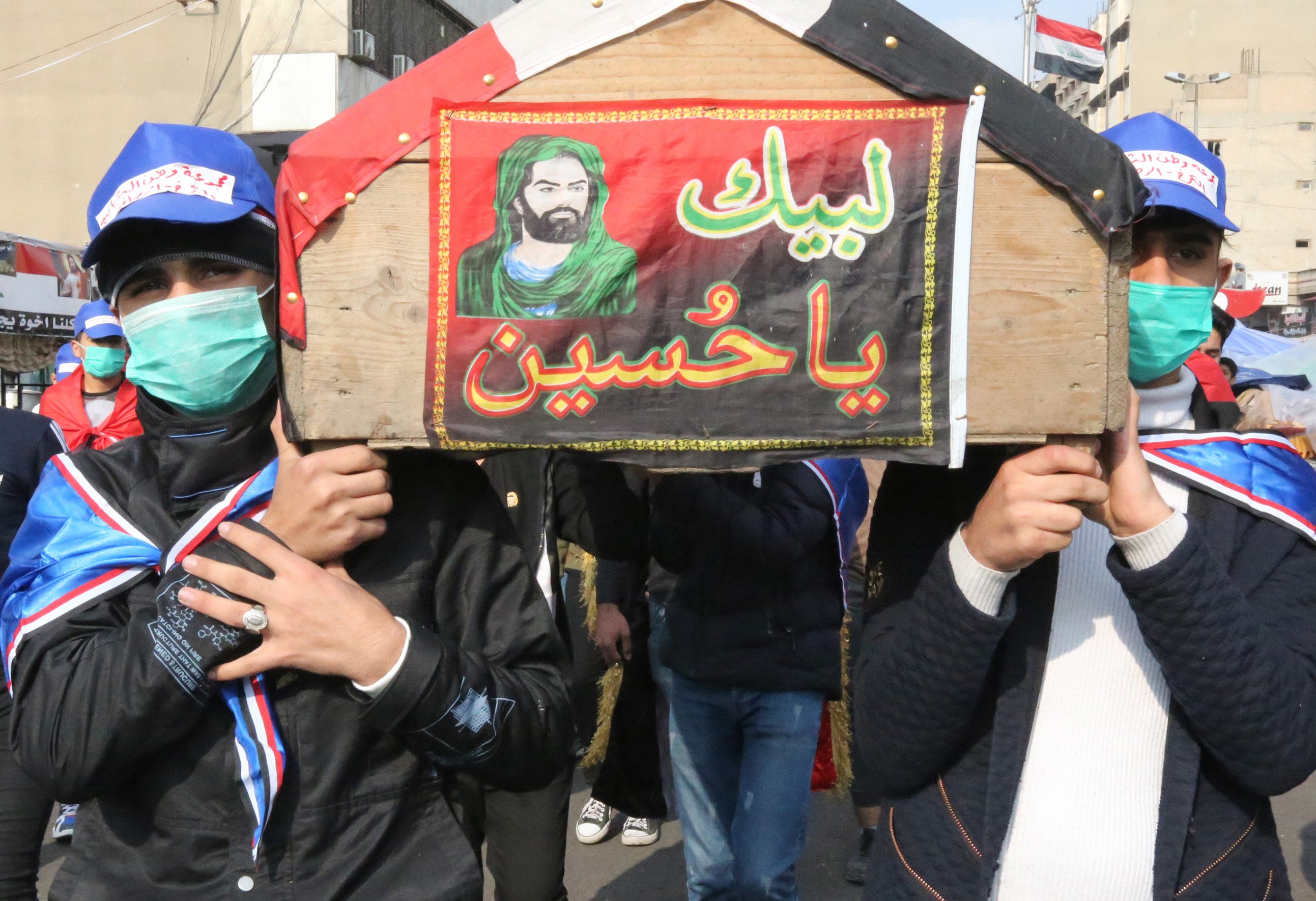 In addition to the cultural dimension mentioned above, the protests have already made some significant political achievements. They successfully forced the religious authorities in Najaf to pressure the government to resign. They have forced the political classes to discuss electoral reform.

And, whether the political classes know it or not, they have created unprecedented political pressure that precludes a return to business as usual. However, anticipating climactic revolutionary change remains misplaced. The reality is that, as things stand, the situation is relatively sustainable.

As undeniably impressive as the protest sites are, they have yet to achieve critical mass. Numbers spike and fall but whatever happens in Tahrir Square has yet to affect daily life in the rest of Baghdad.

Likewise, the protests have yet to paralyse public services or the government bureaucracy. On the global stage the government of Iraq retains regional and international support, and domestically, we have yet to see ruptures in the political and security establishments.

Most importantly perhaps, the protests have yet to significantly impact Iraq’s oil sector – the bloodline of the entire system.

Unless there are changes to the scale, scope and impact of the protests – a general strike, a rapid escalation, a disruption of the oil sector – the present situation can continue for the foreseeable future. Of course there is nothing to rule out a sudden spiral of violence or broadening of the protests, particularly given the reckless resort to lethal violence by the melange of government and government-aligned forces that make up “the state”.

A room for hope

However, even as things stand, there remains much room for hope. One possibility would see Tahrir turning into a semi-permanent site of protest and political expression.

In such a scenario, Tahrir and other protest sites would become a source of constant pressure on the government which in turn will remain in a continuous scramble as they try to both subdue the protests and keep up with public opinion.

Such a tug of war between the street and the political classes could gradually yield long term fruit as the latter yield more and more of their control on the legal, political and economic levers of power. For the protests to maximise their political gains, it is vital that they produce political entities and personalities that can go beyond pressuring the political classes to actually competing with them.

Bargaining rather than overhaul is the more likely source of future change. If a new order were to emerge, it will inevitably retain elements of the old. Determining what elements of the current system can be tolerated in a hypothetical transitional process requires organic leadership that can move the debate beyond wholesale rejection.

Moving forward
After 16 years, the current order is deeply entrenched with enormous interests at stake – Iraqi and non-Iraqi. These are intertwined with significant sections of Iraqi society through relations of patronage and dependence. Put simply, the political classes and those behind them will not simply hand over the levers of power nor will they pack their bags and leave Iraq.

A challenge that leaves no room for either safe exit or inclusion in a new re-negotiated order will yield more resistance of the sort we have seen over the past two months and worse.

By the same token, no amount of force can extinguish what has been created in the protest sites. A new political awareness and culture have been formed. The political classes and the Iraqi system’s international guarantors have to realise that this will need to be accommodated moving forward.

The current zero-sum intransigence that marks the relation between the powers-that-be and the street will eventually have to give way, either to guarded compromise or to a spiral of violence that could quickly get out of control.

Which way Iraq heads will, for the most part, be determined by the incoherent spectrum that makes up the Iraqi political classes and their foreign backers. That incoherence, to say nothing of the bloodshed of the past two months, leaves little room for short-term optimism.

The people who built the spectacle and spirit of Tahrir Square and other protest sites, and indeed Iraqis in general, deserve better.