Death On The Bridge: The Young Lives Cut Short In Iraq's Uprising

The majority of the demonstrators in Iraq who have been met with lethal force during the protests that started on 1st October, were young men born in the 1990s.

Baghdad, Iraq – It took seven hours for the tear gas canister lodged inside Safaa Al Saray’s skull to kill him. For his family, every second felt like an excruciating eternity, as they waited for news from the doctor. Shortly after midnight on October 28, the 25-year-old was declared dead.

Al Saray is one of more than 300 people killed since anti-government demonstrations erupted on October 1.

Amid mounting frustration over years of corruption, high unemployment and poor public services, men and women of all ages and from all walks of life have taken to the streets to demand the overhaul of the country’s political system. At least 15,000 have been wounded, according to the Independent High Commission for Human Rights of Iraq.

While the uprising began with peaceful demonstrations, some protests have since turned violent as security forces used live ammunition and protesters threw firebombs. A government report in mid-October found that security forces used excessive force against protesters. The majority of the demonstrators who have been met with lethal force were young men born in the 1990s, the independent rights group told Al Jazeera.

In the capital, Baghdad, most of those killed came from the sprawling slum of Sadr City and its surrounding neighbourhoods. An unofficial list compiled by the organisers of a memorial tent in Tahrir Square shows the names of 31 victims – all born between 1993 and 2003.

Many were young men of marrying age, like 21-year-old Muslim Abbas, who was due to graduate from college next year; 23-year-old tuk-tuk driver Hussein Mohammed, whose family was too poor to pay for his burial; or Abbas Ismael, 28, who recently became engaged.

Some were younger, like 14-year-old Hassan, an orphaned teenager who made a home out of the city streets and found a community among the protesters.

But mostly, it is young men like Safaa Al Saray who have taken up positions at the head of the protests. Armed with flags and goggles, and sometimes Molotov cocktails, protesters on the front line of the clashes have repeatedly tried to breach the blast walls set up by government forces in a bid to reach the Green Zone, where ministries and embassies are located.

October 27 was the last time Al Saray would walk through his front door. That afternoon, the young man from Baghdad was shot in the back of the head with a tear gas canister on Al Jumariyah bridge.

Symbol of resistance
Born and raised near the low-income area of Sadr City, Al Saray lost his father in 2000 and his mother died of cancer in 2017. He was the youngest of 11 siblings and his older brother Aqil Majid played an important role in his upbringing.

“He was very close to our mother, but I raised him, he called me dad,” said 43-year-old Majid.

A poet, musician and an activist, Al Saray rose to fame among Baghdad’s youth in 2011, when he launched a series of one-man anti-government protests on the streets of the capital, calling for a new political system. He was detained three times.

In October, he focused on documenting the clashes in Baghdad, sharing his videos with local television networks. After he received an anonymous threat relating to his activities, he fled north to the Kurdish capital of Erbil on October 25.

“We asked him not to come back, but he said his brothers and sisters [in Baghdad] were fighting,” explained Majid, sitting cross-legged on the floor of a flimsy tent in Tahrir Square. Two days later his sense of responsibility led Al Saray to return to the capital.

On October 27, the young activist was back on Al Jumariyah bridge, marching towards the concrete blast walls.

“The high death toll includes people who took direct hits to the head from tear gas cartridges, in numbers that suggest a gruesome pattern rather than isolated accidents,” Sarah Leah Whitson, Middle East director at HRW, said in a statement. The rights group has urged the Iraqi government to investigate every death caused by security forces.

“When security forces were told to stop using live ammunition the number of deaths from gunshot wounds went down, but we saw these tear gas cartridges being fired and killing people,” the senior Iraq researcher for HRW, Belkis Wille, told Al Jazeera. “It didn’t so much have an effect on stopping deaths, but it did diminish them.”

However, added Wille, security forces in other cities have continued to use live ammunition, while in Baghdad they have recently resumed the use of live fire.

Today, the image of Al Saray’s resolute stare and bushy eyebrows can be found on banners and colourful murals inside Tahrir Square. His charisma, strong social media presence and unfaltering hope have made him a symbol of resistance for the tens of thousands of protesters who continue to take to the streets. 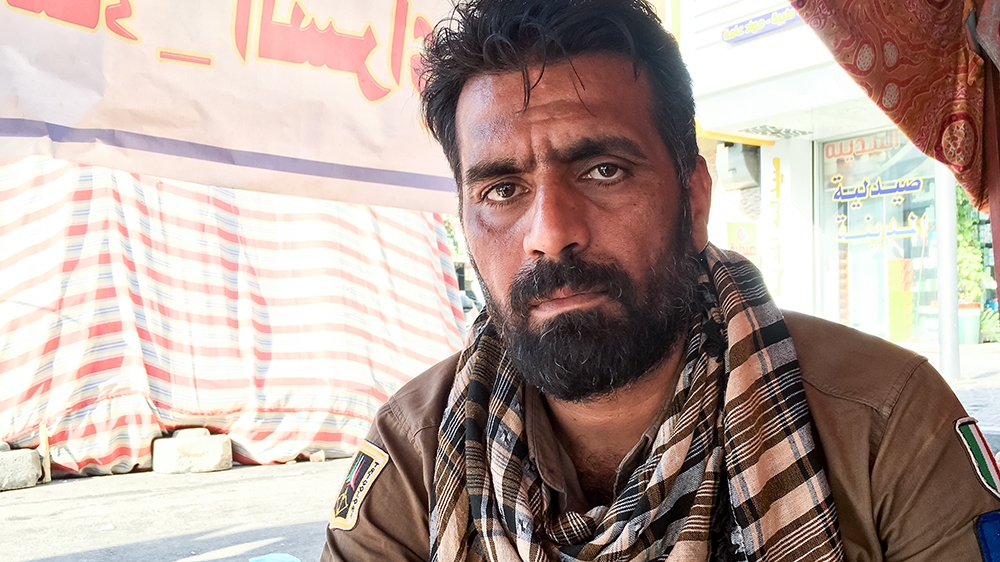 Aqil Majid set up a tent in memory of his dead brother, killed by security forces when a tear gas canister struck him in the back of the head [Sofia Barbarani/Al Jazeera]

The 25-year-old was shot in the neck with a tear gas canister on 30 October. Like Al Saray, he was protesting on Al Jumariyah bridge, an Iraqi flag draped over his shoulders. Al Azzawi was informed of Mohammed’s death when his son’s friend answered the phone instead of Mohammed. “I’m proud of him, I consider him a patriot,” he said.

Dressed in black, Al Azzawi sips on sweet coffee. He refuses to call the uprising in Iraq a protest, preferring to label it a revolution. “I hope this generation achieves its rights. It would ease my pain.”

“I was building a home so that when [Mohammed] got married he could move in,” said Al Azzawi, sitting on a sofa in the family room. Next door, the foundations of Mohammed’s future house are a painful reminder of the son he lost. “He was the kind of person everyone could count on,” recalled Mohammed’s father.

Despite his middle-class background and university degree, Mohammed was unable to secure his dream job in the police force. “He didn’t have the right contacts,” said Al Azzawi, in reference to the widespread perception of nepotism within state institutions, a deep-rooted issue that protesters have denounced. “Most of his friends can’t find a decent job, they’re unemployed and want a chance.” 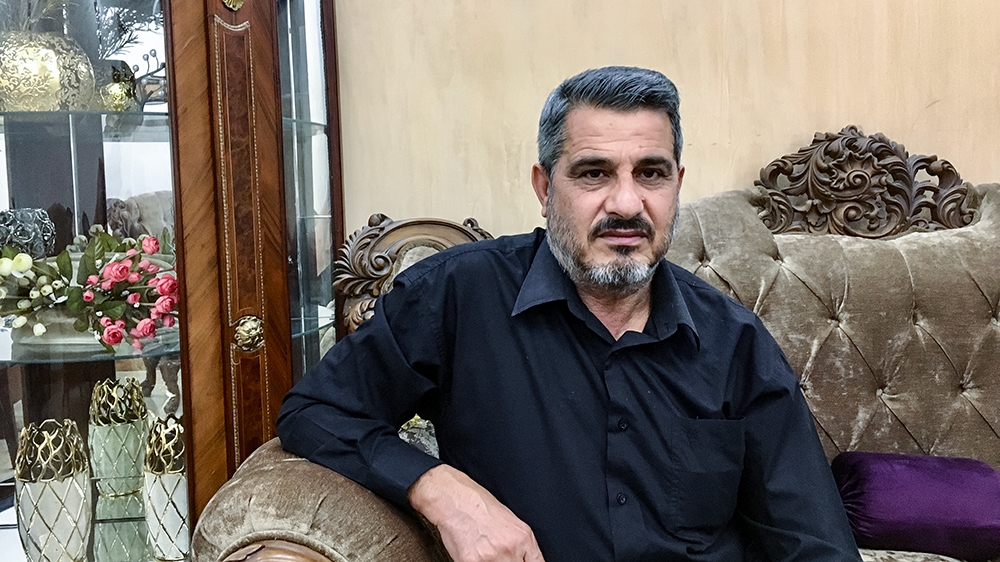 ‘It was hard for me’
At a memorial tent in Ummah garden, portrait photographs of those killed during the uprising were displayed on the walls.

“One was the son of a doctor, one a lawyer, and the other a tuk-tuk driver, one Sunni, the other Shia,” said a man responsible for the site.

All were bound by their disenchantment with a political system, established after the US invasion in 2003, which allowed rampant corruption and nepotism as well as Iranian influence to shape the country.

“Unemployed or employed, they are very concerned about the lack of opportunities, for them and those around them,” said HRW’s Wille.

Like Al Saray, they have all been made into heroes of the uprising by their fellow protesters.

Back in Tahrir Square, inside the tent run by Majid in memory of his brother, protesters rest on carpets and thin mattresses. The tent was set up to supply demonstrators with food, water, masks and helmets in an attempt to protect them from the continued use of live ammunition and military-grade tear gas canisters by security forces.

For Majid, running the tent and helping others is also a way to feel closer to his brother. 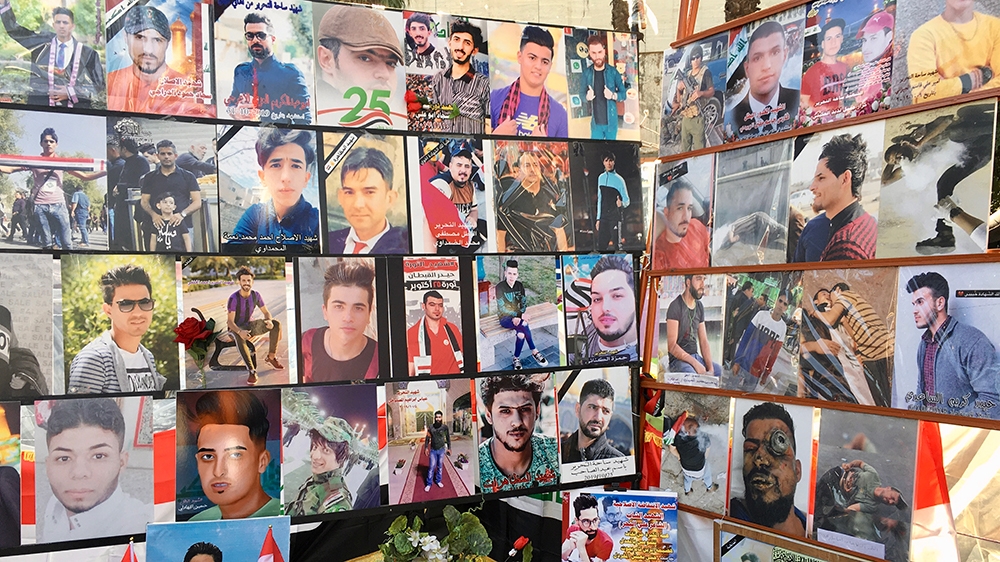 Photographs of dead protesters in a memorial tent in Ummah Garden, next to Tahrir Square [Sofia Barbarani/Al Jazeera]