A trip into the dark heart of Syria

Khaled Khalifa, a Syrian novelist, proves himself again as an unflinching chronicler of Syria's tumultuous times in his new book "Death is Hard Work".

Khaled Khalifa’s Death Is Hard Work is a road trip novel unlike any other.

Not because of the landscape it traverses (the bleak and blasted highways of war-torn Syria), nor because of the pretext for this journey (to transport a father’s corpse back to his home village for burial). 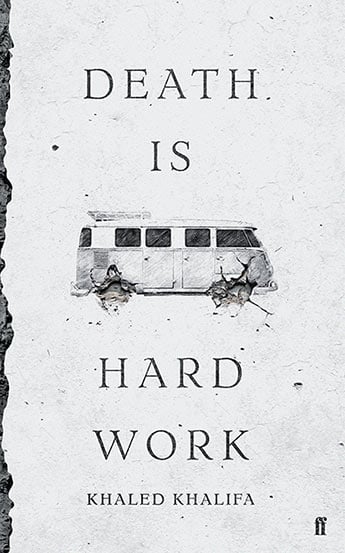 No, what makes Death Is Hard Work unique as a road trip novel is that under the guise of what is necessarily a story of movement and change, it is, in fact, a story of stasis.

There is no spiritual transformation that accompanies the physical journey here: the characters will not return home having learned something, not even a lesson about disillusionment.

Khalifa has always been an unflinching chronicler of Syria’s tumultuous recent history. Though his novels eschew political posturing in favour of foregrounding character, he never shies away from detailing exactly how the regime’s brutalising policies have shaped and confined the lives of ordinary Syrians.

His 2006 work In Praise Of Hatred was about the pitched battles between the Syrian government and the Muslim Brotherhood that culminated in the savage Hama massacre of 1982, wherein regime forces besieged the town for 27 days.

The book was banned in Syria after publication and had to be republished in Beirut: nevertheless, it was shortlisted for the International Prize for Arabic Fiction.

His fourth novel, No Knives In The Kitchens Of This City (2013), was a history of Aleppo under the tyrannical rule of the Baath Party. And it won him the Naguib Mahfouz Medal for Literature that same year.

Originally from the city, today Khalifa lives in and continues to write from Damascus, despite the war and despite the price he’s had to pay for his notoriety: in 2012, during a funeral procession, he was set upon and beaten by regime thugs who pointedly broke his hand.

Three siblings, one corpse
Khalifa’s fiction can best be described as a sort of documentary surrealism, using real-life elements to create an atmosphere eerie and otherworldly in its oppressiveness. Nowhere is this truer than with Death Is Hard Work, his fifth novel.

Three siblings – Bolbol, Hussein and Fatima – board a minibus in Damascus with the intent of taking their father’s body back to his home village of Anabiya, near Aleppo in the far north, to be buried next to his sister, in accordance with his dying wish.

Their father, Abdel Latif, has, incredibly, died of natural causes, unlike so many others during Syria’s bloody conflict. After all, Bolbol tells us “even his neighbour Um Elias had been murdered, though she was in her eighties”. The siblings are estranged, not having gathered in the same place for more than an hour or two during the last 10 years. They have also all proved, one way or another in their adulthood, to have been disappointments in the eyes of their exacting father.

But with the siblings united with Abdel Latif’s corpse in Hussein’s minibus, Bolbol has modest hopes that they might heal the rift and seize this “real opportunity to talk about whether they could be a family again”. 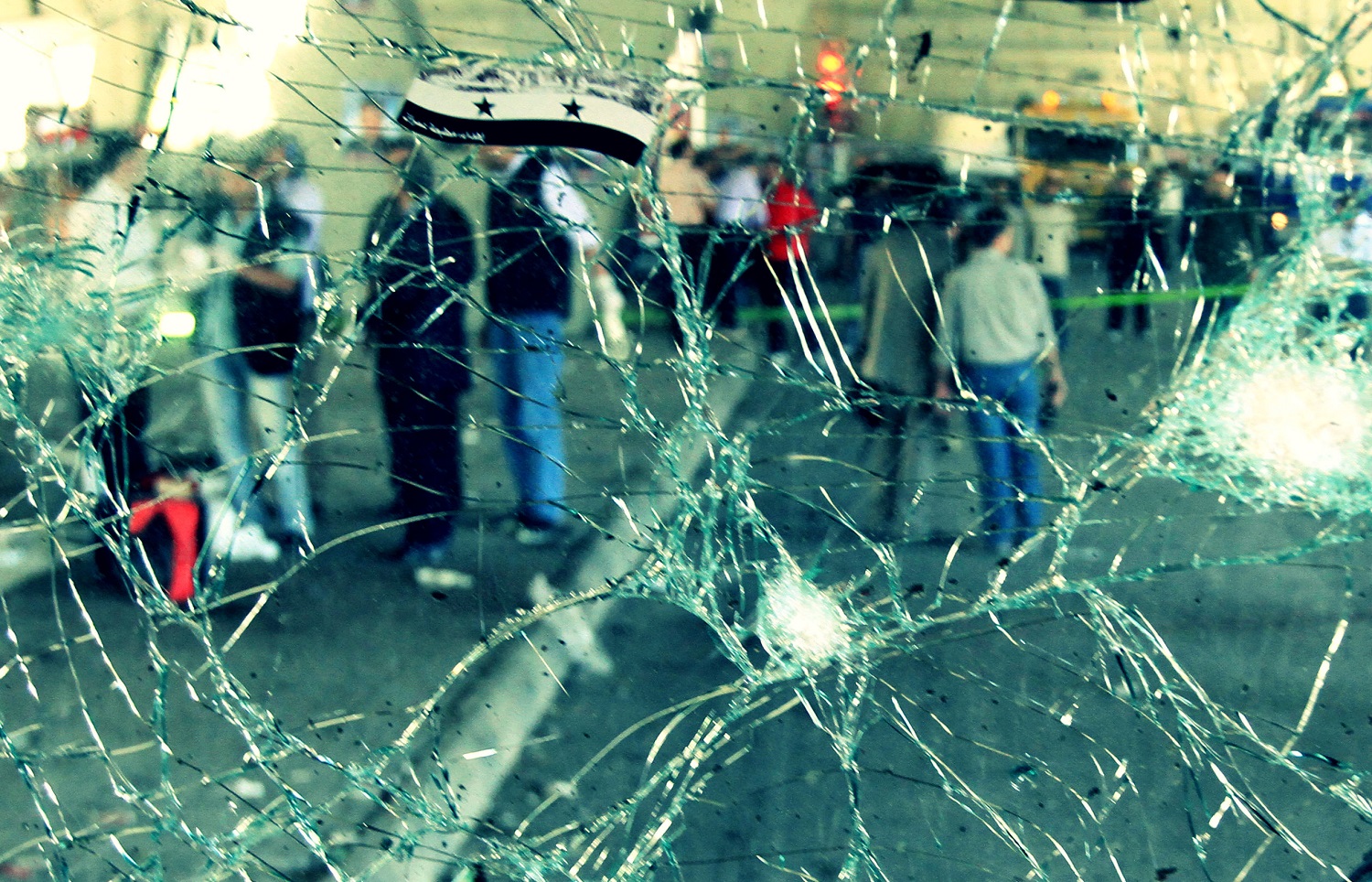 A drive that would normally take a few hours stretches out during the course of several days. Every new morning, the expectation that they might reach Anabiya by midnight slowly disintegrates, as the siblings are waylaid by air raids, bad roads, shelling, interrogations, and long waits at checkpoints.

This is a Syria whose early hopes of a successful revolution have devolved into a savage civil war, where the wrong family name or home village on an ID card is reason enough for a person to be hauled off to a dungeon, to be disappeared or to be tortured into madness.

Instead of speaking, the siblings sink further into their own silence, taking stock of the past and of what precisely brought them to this point; here, on a minibus in the middle of a post-apocalyptic wasteland, trying to fulfil the desire of a father who’d mostly washed his hands of them, to a point where the rites and rituals of death no longer hold any meaning.

The bureaucracy of death
Khalifa’s deft trick, in another upending of the usual conventions of a road trip novel, is that, by taking us into the character’s interior landscapes, we come to understand the forces that have exploded the exterior landscape into its present form. The Syria that predated the war was no less bleak nor unforgiving a place than the Syria that we now see unfolding outside the windows of the minibus.

The siblings come together already exhausted, their various dreams long-since suffocated by the dearth of possibilities available to them.

Hussein, once his father’s favourite, who’d “dreamed of leading an empire”, finds himself a mere errand boy for a petty crime gang where he has “no hope of ascending to become a full member” because the secret police themselves are at the top of the criminal food chain.

Bolbol enrolled to study philosophy at university, wishing “to understand the world” but soon discovers that “his teachers despised thought and sold grades and exam answers to the highest bidders.” Now he works at the Institute of Food Storage and Refrigeration, recording the freshness of onions and tomatoes.

The suffocating burden of the life unlived permeates the entire journey, and the stress of the long days on the road have as much a deleterious effect on the siblings’ mental state as they do on their father’s body, which rots and splits and is crawling with maggots by the end.

And Fatima, like her mother and so many other women before her, is defeated by a loveless marriage that bears no resemblance to the romance that she once dreamed possible. Now almost 40, she has become like all those who have lost their pride, “tell[ing] stories about all the heroic things that didn’t happen in the life they never lived”.

“What did his father’s body mean?” Bolbol asks himself at the outset. What does anything mean within the confines of an oppressive, bureaucratic state, where, as an officer at one of the checkpoints tells Bolbol, “life and death are only a matter of official documents?”

What, then, does courage mean, or fear mean, or love mean among such absurd and crushing rules? Khalifa returns to these themes again and again, providing multiple possible answers.

The siblings cannot provide a death certificate signed by a regime-approved medic. Official records show that Abdel Latif is still wanted by the state. His putrefying corpse is not proof enough of his death: for the bureaucratic state, no reality exists except that which they themselves have documented and decreed.

We see courage at both ends of the spectrum: the courage that comes from despair, from having nothing left to lose; and the courage inspired by love, by love of country, by love of another.

But it makes no difference on the surface: by this point in the novel, whether an act of courage is animated by hope or despair is not because of collective or nationalist feelings but the quiet, private truths that reside in each person’s heart.

Regrets of a dying man
Of all the characters in the novel, Abdel Latif was the only one who managed to find some happiness: not long before he died, he married his old sweetheart, the woman he loved as a young man but never had the courage to approach when they still had their lives ahead of them. (She, however, was only available and willing to marry him because she had lost everything else, including her husband and both sons to the revolution).

Abdel Latif dies thinking of the first time they made love, and believing fervently, as he tells Bolbol again and again, in the eventual success of the revolution, in the fact that “the children of the revolution are everywhere”.

Love, too, at one point allowed Bolbol, “scared of everything”, to let go of his own fear, to march in the streets beside his own unrequited love, shouting defiantly in the face of the soldiers. “He felt a vehement delight,” we are told, for “the moment he buried his fear was like his first orgasm”.

But Bolbol’s optimism and courage are short-lived: he has grown up in a generation already disabused of the dream of Arab liberation that seems, for the likes of Abdel Latif, to be finally coming to fruition all these decades later.

Yet it does not mean that Abdel Latif dies without regret. His request for his own burial is an attempt to perform his own, posthumous reconciliation with his sister Layla, whom he failed to defend in life. And if any figure in Death Is Hard Work is available for a deeper, symbolic reading – then it is Layla.

Layla killed herself years ago, while still a young woman, rather than suffer the indignity – and subjugation – of marrying a man she didn’t love.

But it was not a quiet, private suicide Layla chose for herself: no, she climbed up onto the roof of the house while the wedding revellers were gathered in the courtyard below to celebrate, doused herself with kerosene and then set herself on fire.

Layla self-immolated in the way that Tunisian street vendor Mohammad Bouazizi did in late 2010, an act of personal desperation and political protest that is widely interpreted as the narrative spark for the revolutions which blazed across several Arab countries before eventually igniting in Syria in 2011.

Layla’s suicide was no less an act of political protest. Before she dies, she tells Bolbol’s mother that “she would become a blazing torch, burning her family and lighting the way for other women.”

It is an act of self-sacrifice that meant, through its spectacular violence, to perform both personal outrage over oppression and vengeance on the oppressor, by arousing guilt and inspiring other acts of rebellion, both big and small.

Khalifa’s view of Syria is rendered from suffocatingly up close, without any of the romanticising distance of exile. He offers no trite answers in Death Is Hard Work, whose sparing Arabic has been deftly rendered into English here by Leri Price.

We return to Layla’s death again and again, to the way her family covered it up, “[conspiring] to efface it by concocting fairy tales to cover the truth”. Her suicide, of course, changes nothing, except for the way in which she is, or rather is not, remembered. The blazing rebellion of her death burns as briefly as the hope for a successful revolution.

It is why the small possibility he offers amid the bleakness of this novel feels so serious and real, a possibility that Khalifa himself keeps alive simply by continuing to write.

For, as we are told of Layla at the end: “Her tale lived on despite her family’s efforts to erase it. Stories here might change over time, might be told in new ways, but they never died.”

Death Is Hard Work by Khaled Khalifa is translated from the Arabic by Leri Price. It is published by Faber & Faber in the UK and Farrar, Straus and Giroux in the US.