49 Syrian healthcare facilities have been affected in last three weeks by bombardment by Russian-backed government forces on northwestern Syria.

Wounded civilians in northwestern Syria are struggling to access medical care, their families have said, as hospitals shutter amid heavy bombardment by Russian-backed government forces.

Families said the closures were forcing them to travel further to seek treatment at medical facilities that have become increasingly overcrowded.

A doctor in northern Syria described the situation as  “catastrophic” as medical staff come under increased pressure and supplies dwindle.

According to UN Office for the Coordination of Humanitarian Affairs (OCHA), 18 health facilities have come under attack since 28 April, with 49 being forced to partially or completely suspend activities.

“These facilities provided over 171,000 medical outpatient consultations, over 2,760 major surgeries and supported 1,424 newborn deliveries on monthly,” OCHA said in a statement on Friday.

Masoud Karase, 31, from Marat-Horma said increased demands for medical services meant that his two children injured in an air strike on Tuesday were transferred from one hospital to another, before they could receive treatment.

“I was desperate with my wounded children and needed the operations crucially, It took us hours, but we made it to [the hospital at] Bab al Hawa where they were operated.”

The next day it took an hour’s drive before Karase could find a hospital that as open for Yasmen, 13, and Hamza, 12 to get their bandages changed and have their wounds cleaned.

“Even finding a ride to the hospital is a hard task because I have no money to afford it. It’s all down to having so many hospitals around us bombed and out of service. Thus we have to drive a long distance to seek treatment.”

The bombardment has intensified in recent months as Assad forces attempt to oust opposition militants, among them Hayat Tahrir al-Sham (HTS), Syria’s former Al-Qaeda affiliate, which control most of Idlib province as well as parts of neighbouring Aleppo, Hama and Latakia provinces.

The region was to have been spared from a major offensive under a September de-escalation agreement between Russia, Iran and rebel-backer Turkey, but a move by HTS to solidify its control of the region earlier this year has now been met with a fully-fledged response from Assad forces backed by Russia.

Civilians have been on the receiving end of the nine-year-long war, which has killed more than than 370,000 people and displaced millions since it started with the brutal repression of anti-government protests.

According to OCHA, 160 people have been killed and 180,000 displaced in the last three weeks alone in northwestern Syria.

“This will negatively impact on civilian population’s ability to cope at a time when needs are increasing,” OCHA said.

During an emergency meeting of the UN Security Council on Friday, UN humanitarian affairs coordinator Mark Lowcock said the escalating situation meant that his “worst fears are coming true.”

“When I briefed you here on September 18, I said a full-scale military onslaught could result in the worst humanitarian tragedy of the 21st century. despite our warnings, our worst fears are now coming true.”

Dr Ahmed al-Hor, a doctor working in the emergency section at Enkaz Soul hospital in northern Syria said that doctors were working “beyond their capacity” to deal with the many injured from the attacks.

“Doctors are working hard and beyond their capacity. The ongoing bombing is resulting in a catastrophic situation that we are still working to cover every day and night non-stop.” 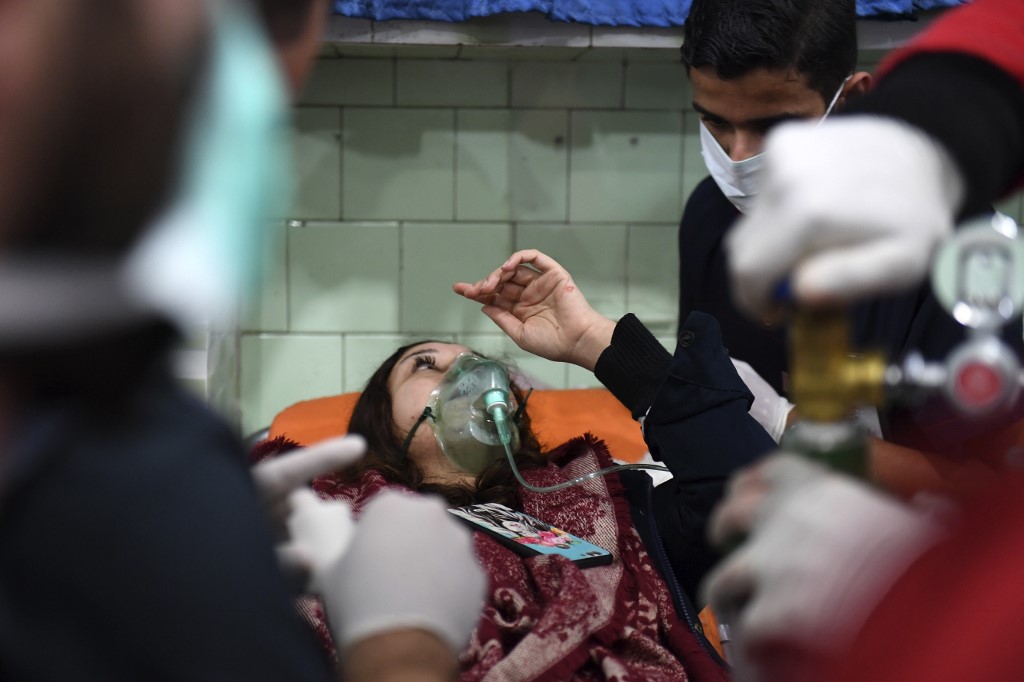 He said that surviving medical staff from destroyed hospitals had arrived to help ease the burden but that medical supplies were needed.

“The survivor medical staff from the devastated hospital have joined in the operation room and emergency services to decrease the tremendous numbers of patients we have to operate, treat or transfer to Turkey,” he said.

“What the medical field needs currently is large supplies of, antibiotics, serums, blood and all relevant medicine for emergency first aid.”

Khaled Bahr, 36 from Kafar Naboda in Hama, said he worried that his nine-year-old daughter Samira’s shrapnel wound was not being treated properly because doctors did not have enough time and medication was lacking.

“Whenever we have arrived in the hospital in the past three days, we have waited long hours and barely get a few minutes from the doctors who check Samira and send us back with nothing. No medicines no further treatment.”

“I am worried about her injury that it might get worse because of the lack of attention. She must need  antibiotics at least, but where I can get them from?,” he added.

Bahr, who is among the 1.3m people internally displaced within Idlib, fleeing to a camp in Maraat Numan with his wife and four children,  blamed Russia for targeting hospitals.

“Russia is bombing the hospitals, so our children and we suffer more and maybe die from our injuries,” he said.

“I do not know what we have done to be treated like that in front of the world’s eyes.”