Demonstrators hail prime minister Sa'ad al-Hariri's departure but promise to stay in the streets until all their demands are met.

Cries of celebration went up across Lebanon on Tuesday as protesters demanding the fall of the government celebrated Prime Minister Saad Hariri’s resignation – though most said this was merely an initial victory in a long-term battle.

“It’s a good first step but we’re still going to stay in the streets,” Pierre Mouzannar, a 21-year old filmmaker told Al Jazeera in central Beirut. “Hariri is part of the problem but he’s not all of the problem … I don’t think anyone thinks we’re done.”

For many demonstrators in the capital, the news of Hariri’s resignation was an important boost in their nearly two-week protest movement following a day of street brawls instigated by supporters of Hezbollah and the Amal Movement party.

“Hariri isn’t the one who’s sending his people to beat us up and destroy what we have. Those people are still in Parliament and we need to finish what we’ve started there,” Mouzannar said, sitting next to a tent being reconstructed by protesters.

On a nearby road leading to Riad al-Solh square, Saba, a 21-year old event planner, was painting Lebanese flags on the faces of passersby. “He should have resigned earlier, but better late than never – and we got what we wanted,” she said.

But she, too, said Hariri’s resignation by no means satisfied her hopes for the unprecedented movement she was part of. “Step two is to get back the money politicians have stolen from us. Then we will hold everyone accountable, and God is on our side,” she said.

As evening fell, hundreds of Lebanese in Riad al-Solh stood together for the national anthem. Many hugged. One woman stood still, tears rolling from her eyes.

“This may be the biggest achievement for my generation, winning in a clash of this level with our politicians,” Nabil, a 30-year old engineer, said.

Outside Beirut, thousands also took to the streets of northern Tripoli, a former stronghold of Hariri’s Future Movement, to celebrate the news. Hundreds of others were out in towns and villages across the country, including in Jal al-Dib, Zouk Mosbeh and Jbeil north of Beirut, and Nabatieh and Tyre south of the capital. 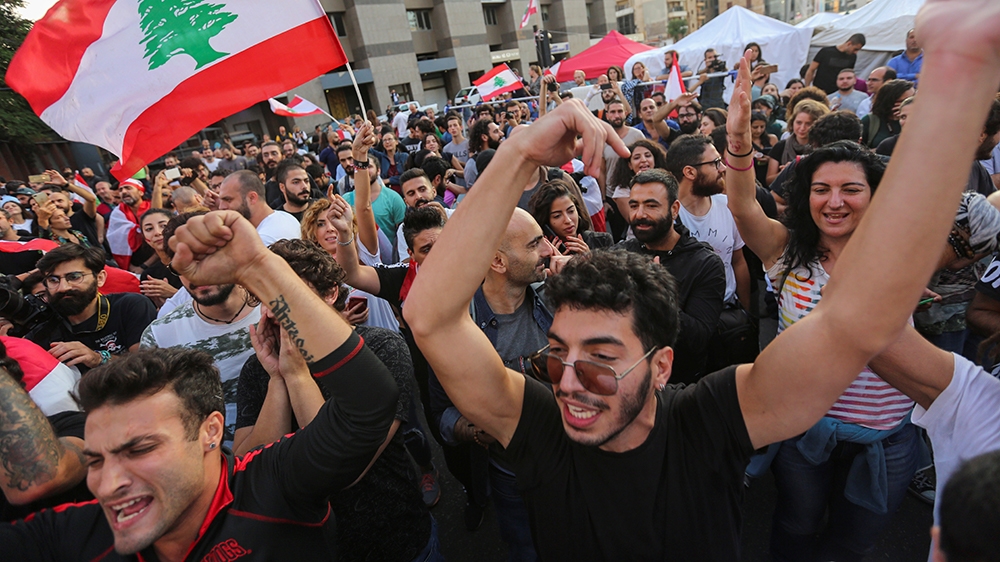 ‘Get rid of them all’
For thirteen days, Lebanese from across the country’s sectarian and political divides have been pouring onto the streets and blocking major roads to call for the resignation of the government and for the ruling elite to be held accountable for decades of corruption.

For a broad swath of the protesters, a main demand has been the formation of a government of independent experts to guide the country through a worsening economic and financial crisis and secure basic services such as electricity and water.

“We don’t want any part of the ruling class to be part of this government. The most important thing is to get rid of them all, and form a new electoral law that abolishes sectarianism and has Lebanon as one district,” Rafeef, a 21-year old law student, said. Lebanon’s current electoral law has the country gerrymandered into 15 districts, with seats allocated by sect.

But the formation of such a government may prove challenging.

Sami Nader, the director of the Levant Institute for Strategic Affairs, said a cabinet of independent experts was a “rosy idea.”

He said the most likely outcome would be the formation of a government “ala Libanainse, which means you put some independent figures in order to satisfy the street, but the old modus operandi will remain”.

“At least Hariri opened the door for a possible solution, because we were in total deadlock and … behaving as if nothing happened and doing business as usual was not a solution.”

Now, the biggest issue is how Lebanon – one of the world’s most highly indebted nations, with public debt at more than 150 percent of GDP – can avoid financial collapse, he said.

Lebanon’s Central Bank Governor Riad Salameh on Monday said the country needed a solution to the crisis within days to avoid a financial collapse.

“The only real way forward for Lebanon is to appoint a government that can move on from the disruption of this revolution and restore the confidence with the people and the international community,” Nader said.

‘Calm and dialogue’
As of Tuesday night, the chart for forthcoming government formation deliberations, which take place via binding consultations between Parliament and the president, were unclear – though Hariri is widely seen as a likely candidate to again head the new government.

In the immediate aftermath following Hariri’s announcement and the attack on protesters, most political players simply called for calm – though Hezbollah and its ally the Free Patriotic Movement, the biggest party in the now-resigned government, did not make official statements.

“What is happening requires immediate calm and dialogue between all Lebanese sides,” Parliament Speaker Nabih Berri, an ally of Hezbollah, told local media, adding: “What is happening is not sectarian at all.”

Among other chants, those who ransacked the central Beirut area and beat protesters were heard shouting pro-Shia chants.

Lebanese Forces chief Samir Geagea, whose four ministers quit from government on October 19, welcomed Hariri’s resignation. He said a new “government of specialists” should be formed and include people known for their “cleanliness, integrity and success”.

Progressive Socialist Party chief Walid Joumblatt, an ally of Hariri who had previously called on the resigned prime minister to resign, before reversing this call, also said dialogue and calm were paramount in the current situation.

Back in Riad al-Solh, Rafeed, the law student, was pouring bulgur wheat into plastic plates from a large pot brought to the square as she reflected on the momentous news of Hariri’s resignation.

She said she had woken up the day before feeling like the protest movement was coming to an end. It was raining, turnout was low across the country, and the government did not seem like it was budging.

“But after what happened today, I’m certain we won’t be leaving the squares,” she said.

“We have nothing to lose at this point. If they want to kill us in the squares, let them do it – but we won’t budge until our demands are met.”