The 'foreigners' of Lebanon's revolution

Lebanon: Protesters with Lebanese mothers say they have the same demands as fellow demonstrators, even if the state doesn't legally recognise them as citizens.

On day 53 of the revolution, Taher Zoabi urgently surveys his neighbourhood – a protest encampment in the heart of Beirut – assisting his neighbours with reinforcing their tents against a heavy winter storm that has blown in.

Zoabi proudly claims to have been one of the first demonstrators who ignited Lebanon’s popular uprising.

On 17 October, he and a handful of others descended onto the streets with their motorbikes, before they were joined by hundreds more that evening, and hundreds of thousands more in the days to come.

Nearly two months into the mass movement against widespread government corruption and economic mismanagement, Zoabi and many others are still camped out in downtown Beirut, with easy access to planned demonstrations and actions against Lebanon’s political elite.

Most of the tents occupying the capital’s downtown have now evolved into makeshift structures made of wooden pallets and tarpaulin – physical symbols of the protest movement’s unshakable resolve to take down a political establishment they perceive to be responsible for Lebanon’s faltering economy.

The residents of these tents have endured harsh rainstorms and regular attacks from supporters of Hezbollah and Amal, allied political parties that have been vocally critical of the uprising.

On such evenings, Taher and his companions patrol the perimeter of their encampment, warning others of oncoming incursions. On other evenings, he helps block roads with the aim of pressuring the political elite into capitulating.

Although he has been heavily active and invested in Lebanon’s revolution since the first day, Zoabi isn’t Lebanese – not legally.

By law, only Lebanese men have the right to confer their citizenship to their spouse or offspring through a nationality law that is a holdover from Lebanon’s French Mandate-era. Lebanese women are forbidden by the antiquated nationality law from passing citizenship to their children, so their offspring – people like Zoabi – are left without adequate legal and social protections in Lebanon.

Among the many reasons Zoabi has camped out in downtown Beirut, he is also demanding Lebanese citizenship, which he perceives to be a birthright by way of his mother. 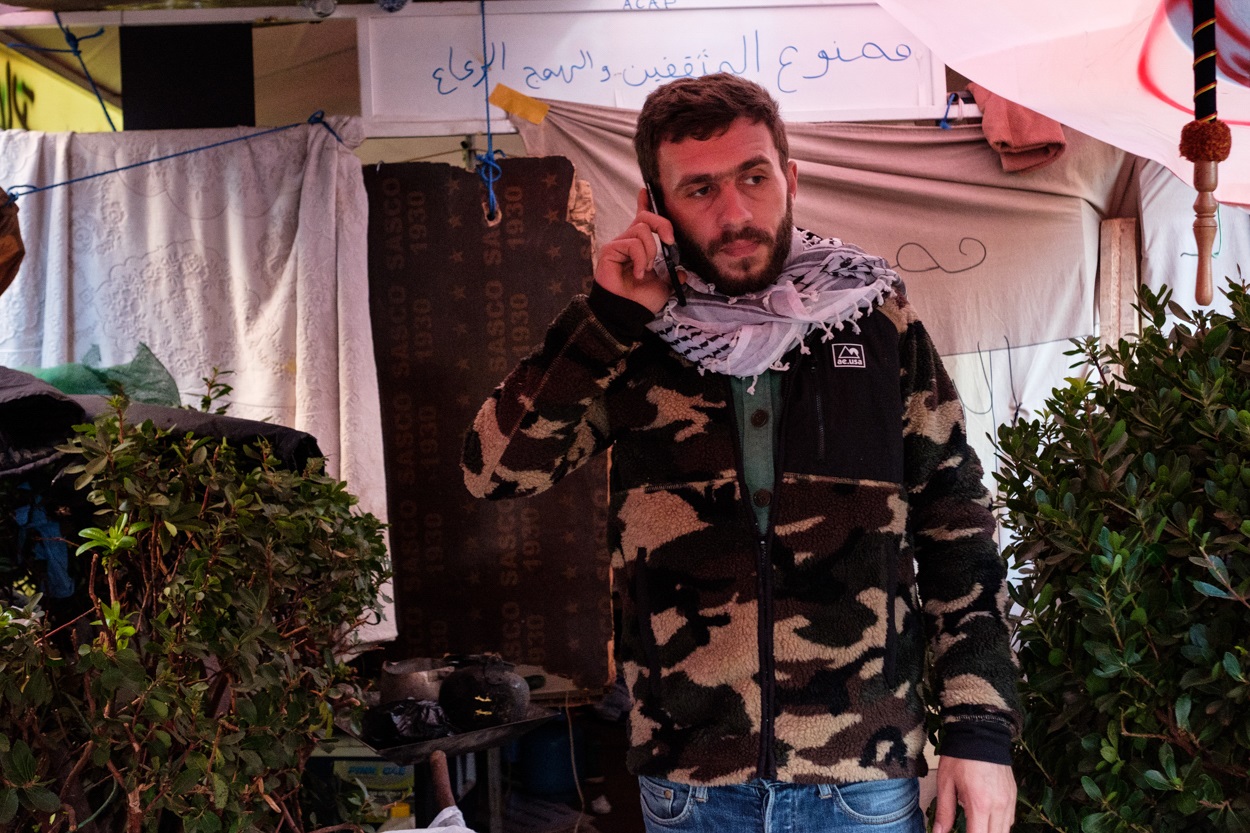 Taher Zoabi, born to a Lebanese mother and Palestinian father, outside his tent which he shares with a friend in Riad al-Solh Square (MEE/Rita Kabalan)

Considered foreigners by the state, the offspring of Lebanese women and foreign fathers must renew residency permits every three years in order to reside in their own country.

They cannot access public healthcare such as national health insurance or government-subsidised healthcare, although their taxes pay into the system; they are effectively barred from many professions; they cannot take loans from banks; and in some cases, they are limited from owning or inheriting property by quota limits on property ownership for foreigners.

In short, their access to work, education, social services and healthcare is severely hindered. Meanwhile, the psychological stigma of their foreigner status is difficult to measure.

‘Change for the better’
Zoabi isn’t alone. In downtown Beirut and around the country there are countless “foreign” individuals born to Lebanese mothers who share the same popular demands of Lebanese citizens to topple the political elite, and are demanding an end to widespread corruption and governmental misrule which they believe have driven the country into the ground for the past 30 years.

For 24-year-old Eva, who also occupies downtown Beirut day and night, demanding her citizenship is just one of her multiple demands as part of her participation in Lebanon’s overall mass movement.

“This is the most beautiful country in the world, and I want it to change for the better,” she says of Lebanon, sitting across the street from the tent she occupies during the day. “I won’t allow corrupt politicians to ruin my country.”

Eva’s father, a Syrian citizen, died in Lebanon when she was 13, and she has almost no relation to Syria despite her citizenship. The last time she was in her father’s country was to seek treatment for her leukaemia, which she was diagnosed with a year ago.

She was told that the treatment she needs would cost upwards of $1,600 per session in Lebanon because she cannot tap into the national health insurance or government-subsidised medical care. In Syria, healthcare is free in government hospitals.

But, she says, seeking treatment in Syria would mean living and working in a foreign country where she has no support system, and ultimately the cost of living would be the same. “The person who was raised in one land can’t just move and adapt to another land,” she insists.

Eva, who did not want to use her real name, estimates that she has four or five years left to live. She maintains that she has come to terms with her situation and has given up on the idea of treatment, but insists that a change in the outdated citizenship laws might benefit others in her situation.

In the meantime, Eva says she has found her peace in the revolution which has given her a sense of belonging by unifying disparate people from all over Lebanon. “I feel like this place is my home,” she remarks serenely.

Establishing a physical presence
Lebanon’s fragile sectarian balance is the oft-cited reason for the government’s reluctance to give Lebanese women the legal right to confer their citizenship, despite the outdated 95-year-old nationality law’s origins in the French Mandate era.

Politicians maintain that allowing Lebanese women to give citizenship to foreign spouses and offspring would tip the scale in favour of a Sunni Muslim majority, as most Palestinian and Syrian refugees who reside within Lebanon tend to be Sunni.

But this argument is flawed and discriminatory, according to Mariam el-Zahbi, a coordinator in the “My Nationality, My Dignity” campaign, because it is not applied to Lebanese men who marry foreign women and whose children are automatically granted Lebanese citizenship. 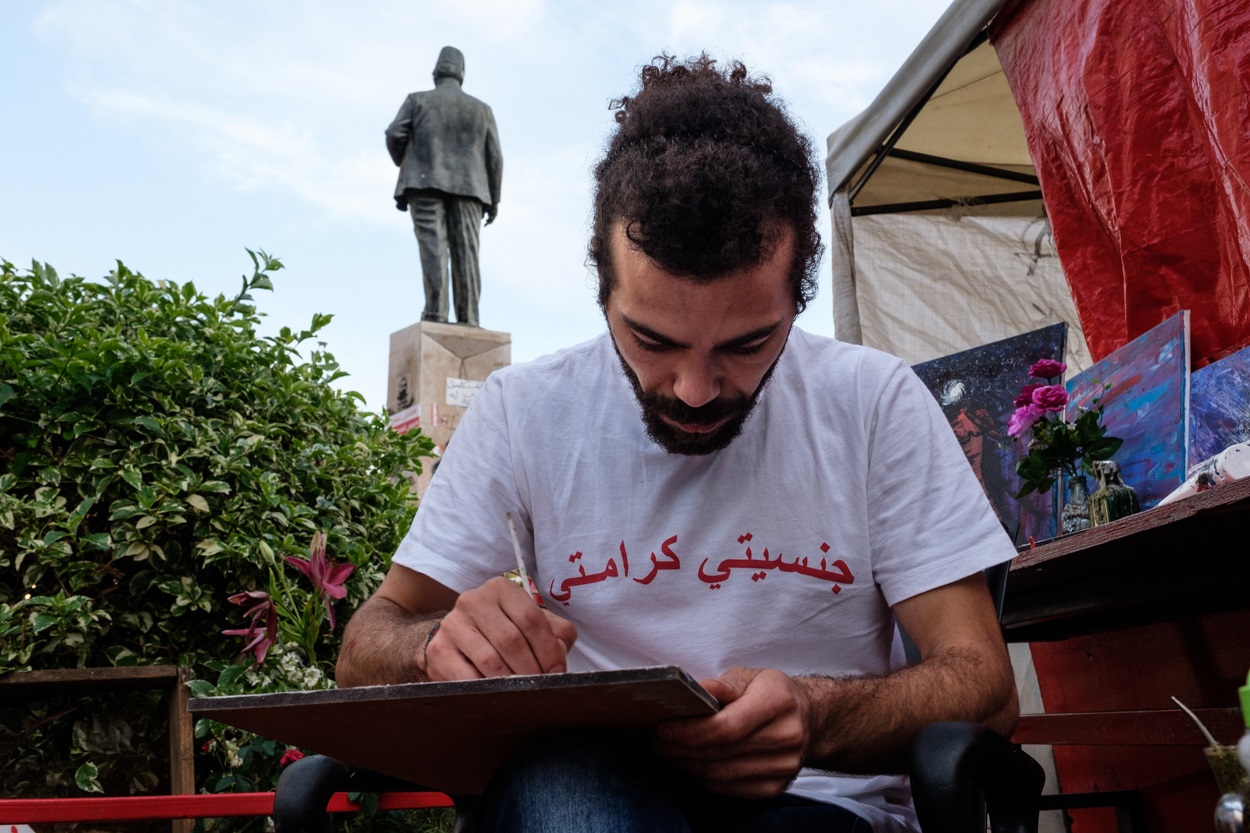 Mahmoud al-Khash, a protester with a Syrian dad and Lebanese mother who is better known as Abu Ward, paints outside his tent while wearing a ‘Jinseeyati Karamity’ – ‘My Nationality, My Dignity’ – t-shirt (MEE/Rita Kabalan)

“My Nationality, My Dignity” is among many grassroots advocacy organisations which have made their presence felt in Lebanon’s uprising. Having advocated for an amendment to the nationality law for years, they’ve established tented kiosks in several cities in Lebanon, including downtown Beirut, advocating for Lebanese women’s rights to give citizenship to their spouse and offspring, a right they argue is fundamental.

El-Zahbi, the campaign’s media and communications officer, asserts that the number of individuals with Lebanese mothers “who cannot live in dignity in their own country” is not trivial.

There are no current official statistics on Lebanese women married to foreigners, nor on the amount of offspring affected by this law, but a report conducted in partnership with the United Nations Development Programme in 2009 found that nearly 18,000 women had married foreign spouses between 1995 and 2008. The amount has likely gone up since then.

Those affected by the law “only know and love this country, and it rejects their existence”, says El-Zahbi.

‘A woman is not less than a man’
Zeina Kaissi, a Lebanese divorcee, attends the protests every day with the intention of ensuring a future for her son, who has his father’s Syrian citizenship despite her custody of him.

Her four-year-old, Hamoude, was born with an undescended testicle, which could lead to numerous health complications later in life such as testicular cancer. But the operation is costly and Hamoude, like Eva, cannot benefit from the national health insurance due to his Syrian citizenship.

When she initially got pregnant, it had never occurred to Kaissi that her son would not be Lebanese.

“I never thought about it because it seems so obvious that, of course, he would be Lebanese,” she comments, bitterly. “But now he’ll have to emigrate from his own country if he wants to live in dignity.” 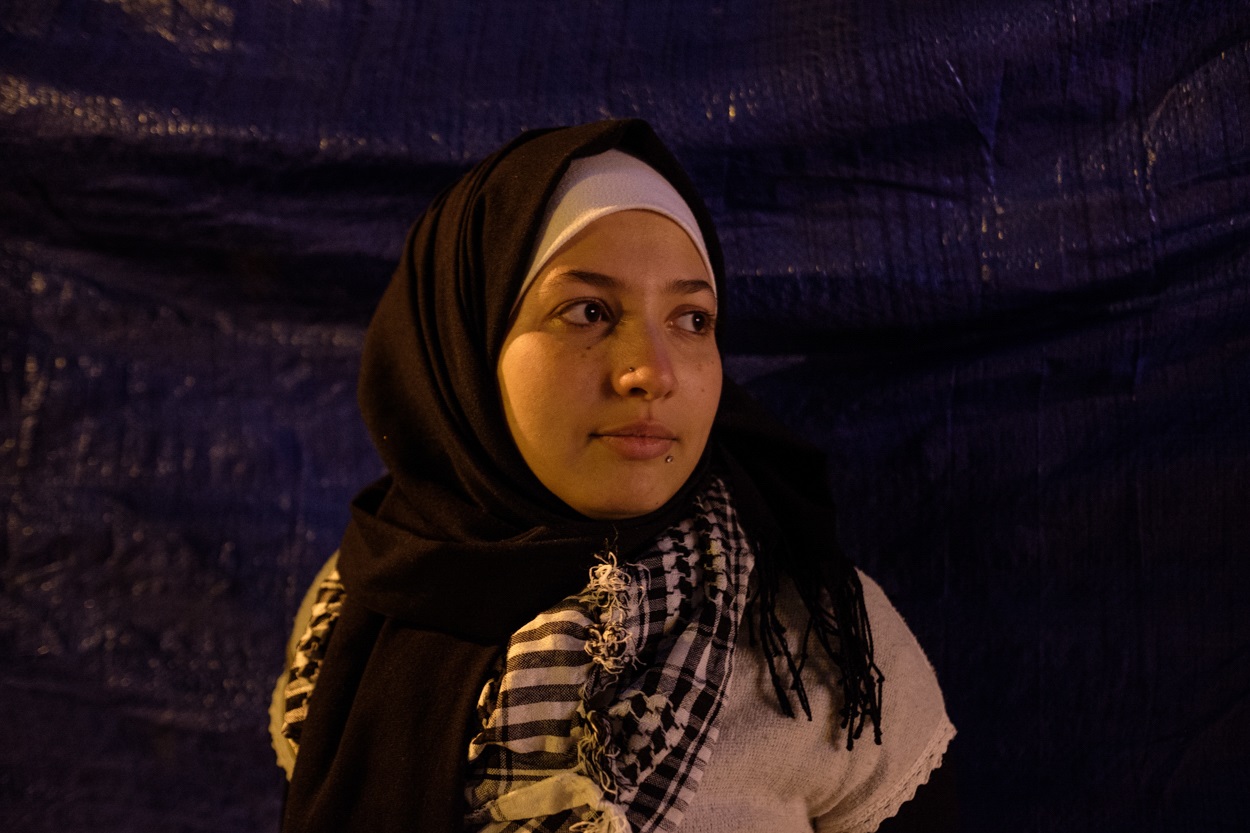 Her resentment towards the nationality law is unmistakable. “This is pure misogyny,” she scoffs. “A woman is not less than a man. But this country is backwards, and we need to change that.”

Last year, Gebran Bassil, Lebanon’s foreign minister and leader of the Free Patriotic Movement, a Christian political party, expressed support for an amendment to the nationality law which would give women the right to confer their Lebanese citizenship to their foreign spouses and offspring.

But his proposal sparked outrage because he would have exempted giving citizenship to foreigners from “neighbouring countries” such as Syria and Palestine, the majority of whom tend to be Sunni.

Bassil is not alone in his concern for the upset of the sectarian balance by nationalising “foreigners” with Lebanese mothers.

Lebanon struggles to support up to 1.5 million refugees from neighbouring Syria, which is wracked by vicious civil war, and hundreds of thousands of Palestinian refugees who have resided within the country for the past 71 years, following their forced exodus from Palestine, what is now Israel.

For a small, multiconfessional country in economic turmoil, refugees have become easy scapegoats for Lebanon’s political-economic deadlock – Syrians and Palestinians are not regarded favourably by many Lebanese.

The same demands
Asked whether foreigners with Lebanese mothers should have a role in Lebanon’s revolution, a protester in downtown Beirut, Hisham Boas, tells Middle East Eye: “It’s not their right, they’re not Lebanese. Maybe if they become Lebanese, they can be part of this.”

It’s difficult to ascertain how popular such an opinion is, as much of the Lebanese uprising has manifested as a vocal rejection of the sectarian system of governance, articulated in protesters’ demands for a technocratic government that is completely detached from the current political class.

Taher Zoabi, the half-Palestinian, half-Lebanese squatter who has been active in the protests since the very first day, acknowledges that “many people think Palestinians are taking advantage of the revolution to demand their citizenships”.

“But my demands are the same demands of everyone else in the revolution,” he says. “As a foreigner, I don’t know if I’d have the right to criticise our politicians. But I’m not a foreigner, no matter what the law says. And I do criticise them.”

On day 57 of the revolution, it is once again raining, and Zoabi is still there, smoking a cigarette, making peace between his arguing neighbours. The scene paints a picture of a man who is quintessentially Lebanese, despite the one missing component: his nationality.