Stuck in limbo: The displaced residents of Syria's northeast

Three months into Turkey’s offensive, displaced Syrians across Camp Washokani in Syria and Bardarash in northern Iraq, tell stories of a harsh life in IDP camps.

It was a Turkish bombardment that put an end to Fulla Ayo’s wedding in the Syrian northern town of Ras al-Ain.

Her sister Jihan cannot help but smile when she remembers the guests, all dressed smartly and elegant, looking at each other in disbelief on the back of a cattle truck transporting them to safety.

Then she starts crying. What was supposed to be a day of celebration soon turned into chaos, as the family scrambled to escape the first wave of attacks in Turkey’s third cross-border offensive into northern Syria.

“I had already noticed something strange in Serekaniye [Ras al-Ain] that day but people said that it was nothing more than yet another threat by [Turkish President Recep Tayyip] Erdogan,” said Jihan.

“Then the first bomb fell and everyone screamed and cried. We wanted to run away but we didn’t know how, there were no cars,” Jihan, a 36-year-old university teacher, told Middle East Eye in her office in the northeast city of Qamishli.

The girls’ father eventually managed to get the cattle truck that transported the family out of their hometown, and they haven’t returned since.

Turkey launched its incursion into northeast Syria on 9 October to target the US-backed Kurdish YPG, after President Donald Trump’s surprise decision to move US troops from the area. Ankara deems the YPG, which spearheaded the fight against Islamic State, a threat linked to Kurdish PKK separatists in Turkey.

The PKK has waged a deadly decades-long war against Turkey.

The Turkish offensive, fought alongside allied Syrian rebel groups, has displaced more than 200,000 people, according to the United Nations.

The luckiest among them have taken refuge in family homes in Qamishli or Hassakeh, the area’s main cities, but tens of thousands remain stranded in abandoned schools or refugee camps of Washokani in Syria and Bardarash in the Kurdistan Region of Iraq.

Inside a room that was once a lab, Gariba, a displaced Kurdish resident from the city of Ras al-Ain, now held by Syrian rebels allied with Turkey, complains about the cold, the lack of water, and the noise.

“It’s eighteen of us in this room and the children won’t stop for a second,” says the 26-year-old mother of four.

A neighbour from her hometown told her that her house had been looted before a new family was resettled in it. Turkish-backed Syrian fighters have been accused of several abuses during the operation, including the summary execution of a Kurdish politician.

“Three days ago, my brother-in-law returned from Ras al-Ain but he got kidnapped by jihadists. They’re asking for a $100,000 ransom. How could we possibly raise all that money?” says Gariba.

The stories of looting and abuses against civilians are recurrent among the displaced. 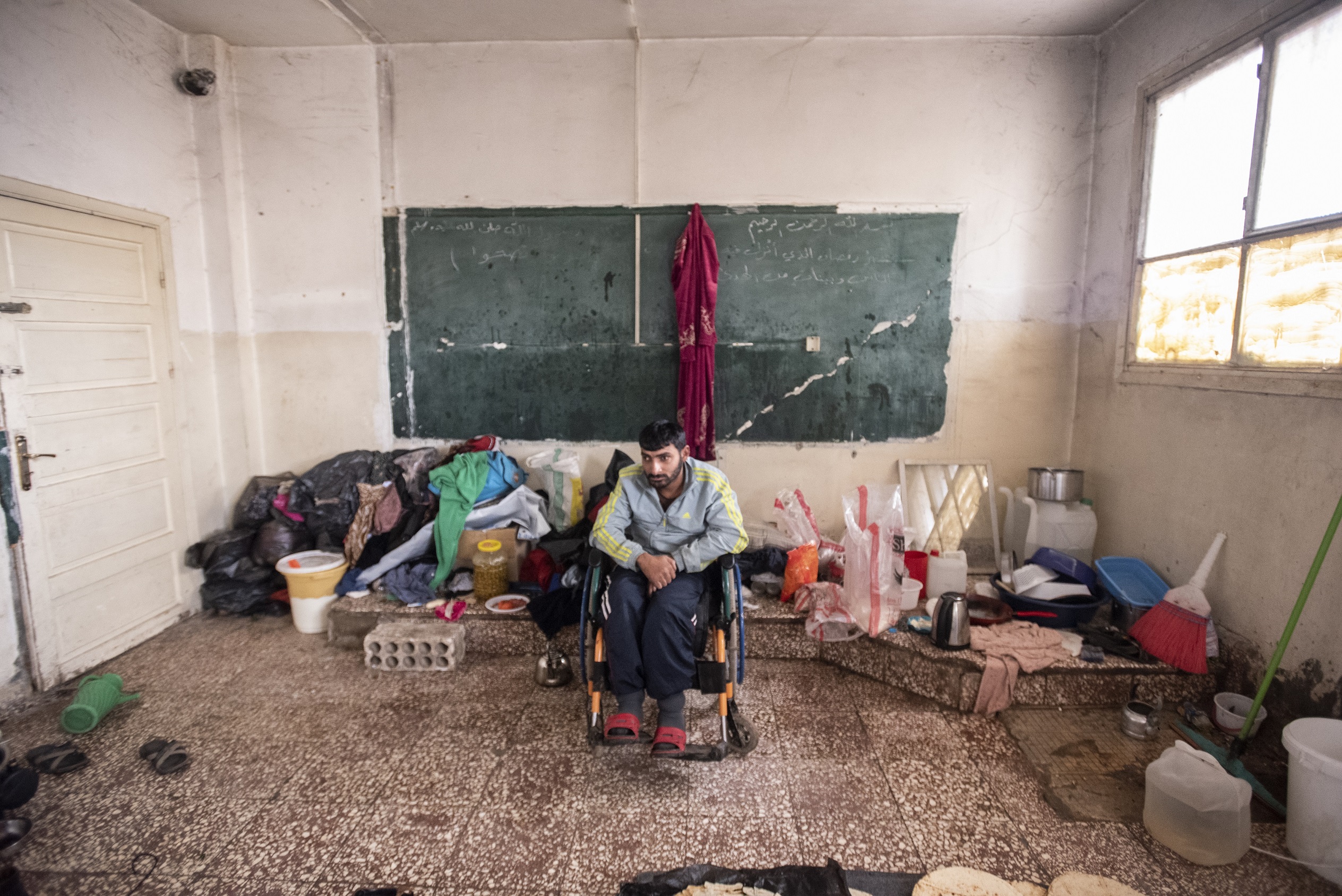 From a class on the second floor, Zekia Halaf, an Arab resident from Ras al-Ain, says she has lost four of her brothers since the Syrian war started in 2011: two while fighting in the ranks of the Syrian army and the other two while with the YPG.

“The last one died in a drone attack on the first day of the [Turkish] offensive. They will not stop until they’ve finished us all off!”

The tents of Hassakeh
It is on the outskirts of Hassakeh where the Kurdish autonomous administration has set up the Washokani refugee camp to cope with the emergency.

The Kurdish Red Crescent staff manning the camp told Middle East Eye that they look after more than 4,000 displaced people, “with at least one new family arriving every day”.

“My husband and I went from town to town on foot with our four children, fleeing as the mercenaries approached,” said the woman with a traditional tattoo on her chin.

“We finally made it to Hassakeh, but we couldn’t afford to rent a flat so we ended up here.”

In a tent nearby, 82-year-old Omar Hamoud relies on a catheter as he lies down under three blankets.

Two of his sons are with him but he’s concerned about the third one.

“He suffers from diabetes and all we know is that he’s being held by the mercenaries,” says Hamoud, who says he has lost his crops, his house and his belongings.

“They have even removed the tiles so only the walls remain today. That’s what they told me.”

At his age, he fears he will not be able to ever set foot again in his village.

In the meantime, a new generation is being born in the camp: Ayan, Mahmoud and Suriya are the first natives of Washokani.

In a report released in November, Human Rights Watch accused Turkey’s proxies of “executing individuals, pillaging property, and blocking displaced people from returning to their homes”.

As early as 18 October, Amnesty International had pointed to “damning evidence of war crimes and other violations by Turkish forces and their allies”.

Some analysts see Operation Peace Spring as a follow-up to the 2018 Afrin campaign, which left a significant Kurdish border area in the hands of the same groups who control Ras al-Ain and Tal Abyad today.

Qamishli
Stories similar to those told in Hassakeh are also frequently heard on the streets of Qamishli.

At 17, Diyar has just returned from the Iraqi Kurdish region. He had crossed the border to Iraq after the offensive was launched only to end up in the Bardarash refugee camp. But the prospect of enduring the harsh winter in a tent brought him back to Qamishli, where he now lives with his parents in an uncle’s house.

“Before the attack I was looking forward to finishing high school in Ras al-Ain and enrolling at university in Qamishli. Now I feel like I’m wasting my time doing nothing,” Diyar says. 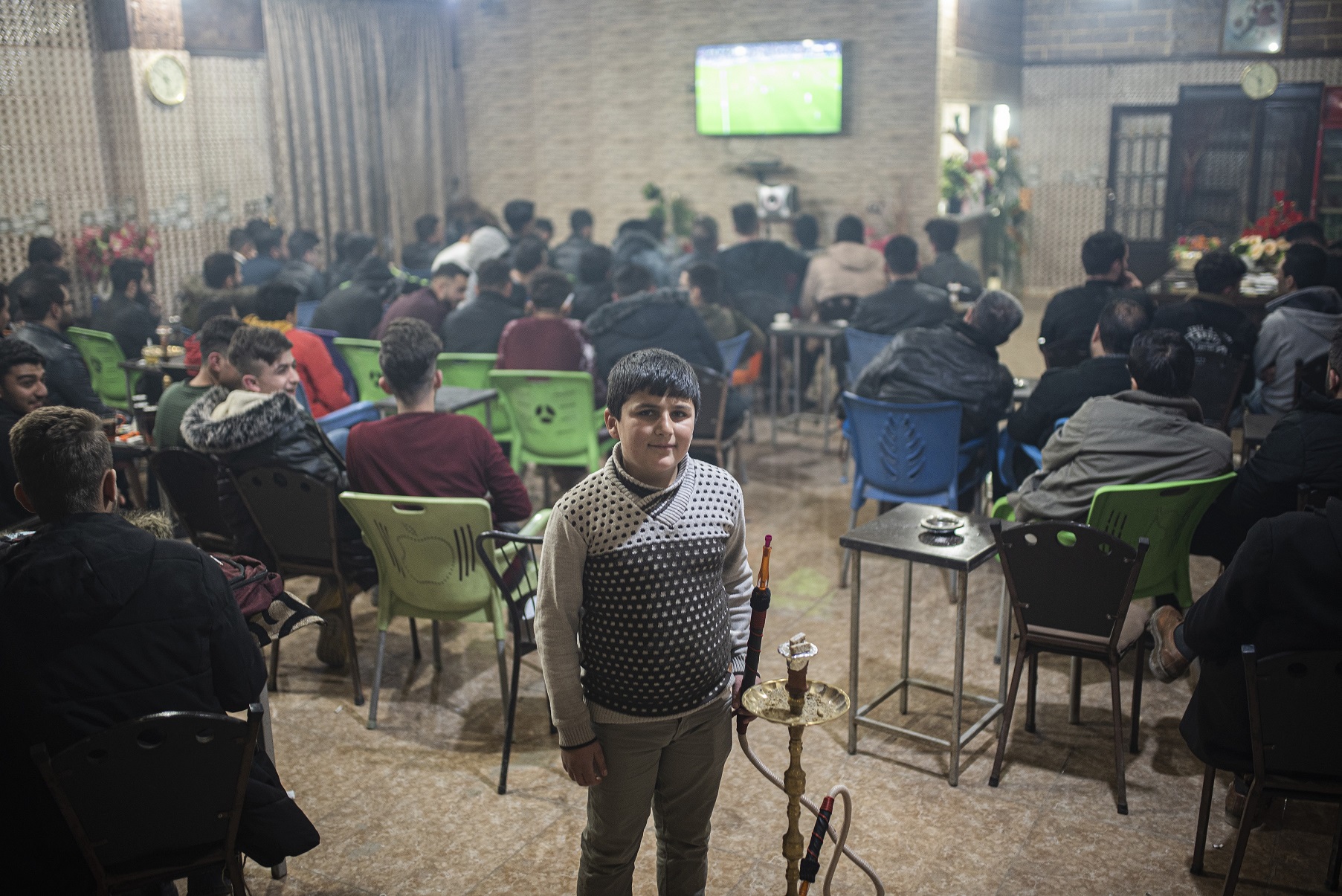 In contrast, 13-year-old Ahmed can hardly take a break as he struggles to clean the tables and change the charcoals of the water pipes at his uncle’s cafeteria.

The uncle produces the images of a torn body on his cell phone.

“It’s Ahmed’s father. The jihadists killed him when he tried to get back to his house in Serekaniye two days after the attack started. Now I’m taking care of his children,” says the owner of the cafeteria.

Almost three months after the day that put an end to Ahmed’s childhood, his native town of Ras al-Ain remains very much off limits.

Ghost town
While Ankara signed deals with Washington and Moscow to halt its assaults, on 17 October and 22 October respectively, violence has not ceased in northeast Syria and civilians are still caught in the crossfire.

Local NGOs point to over 230 civilian casualties since the offensive was launched. Humanitarian workers have also been targeted. On 3 November, a Doctors Without Borders convoy was hit by an alleged Turkish mortar strike killing Zau Seng, a member of the Free Burma Rangers, and wounding three others.

Today, the frontline looms over small villages like Tel Tawil.

Once a thriving town of 1,000 inhabitants – a majority of them Assyrian Christians – Tel Tawil is a ghost town where only YPG fighters, the Syriac Military Council (MFS) and a handful of people too old to leave remain. 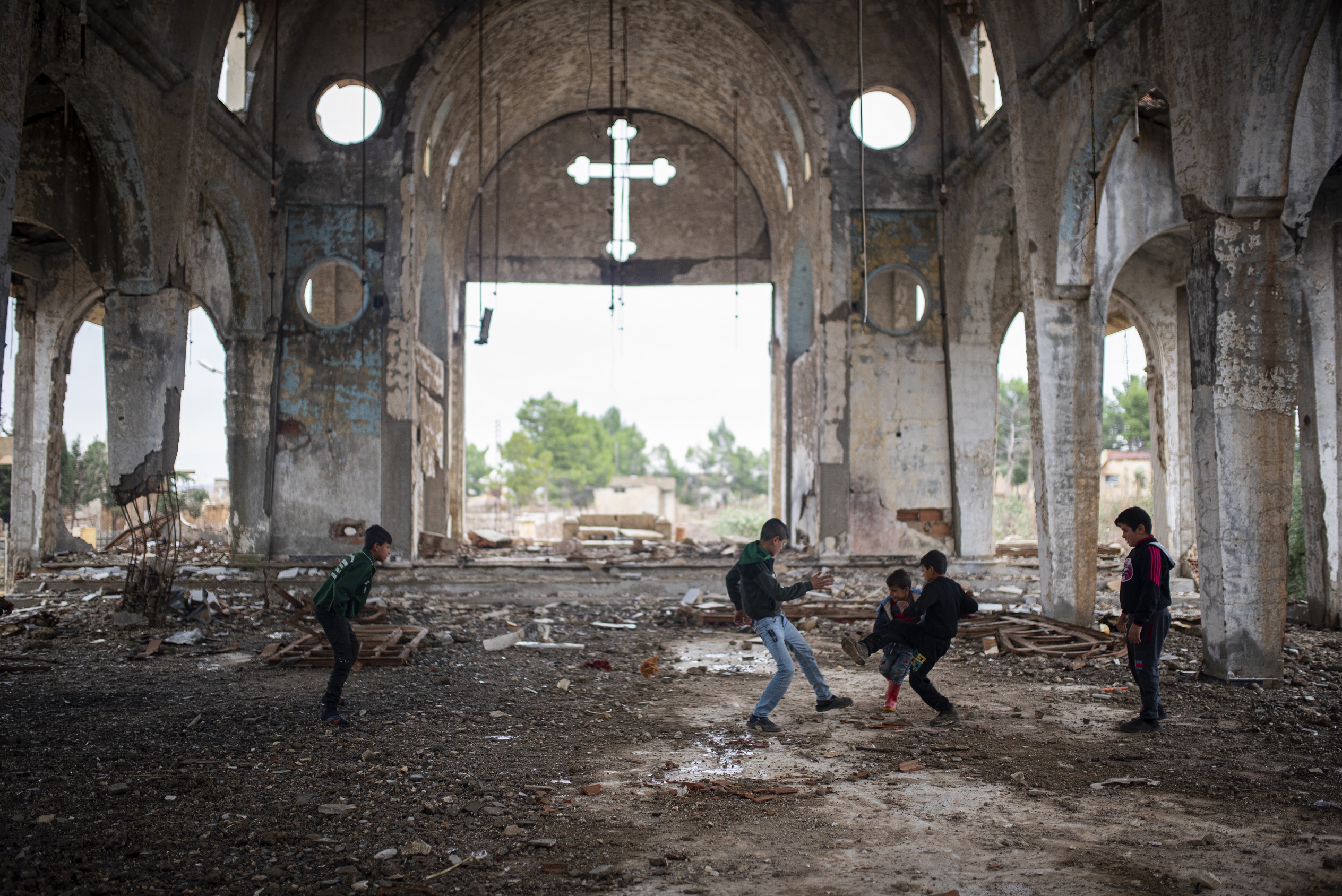 Daudie, barely one kilometre from Tel Tawil, is under the control of Turkey’s proxies.

“Do you see that white car driving across the road? It’s them,” Udai, a 20-year-old Christian fighter tells MEE.

It’s less than a 10-minute walk from the MFS position to the local school. There are no children left in the village but it’s still easy to come across teacher Andurios Zeia inside the building.

The 65-year-old was about to retire “when everything started”. Amid the sound of mortar shelling in the distance, Zeia says he’s scared of staying, but also of leaving.

“Where could I possibly go?” he asks from an empty playground.