Climate emergency in the Middle East: 13 threats to the region

Climate change, rapid growth and mismanagement are devastating many countries in the Middle East, which has exacerbated tensions.

The Middle East and North Africa have always been used to more than their fair share of extreme weather and conditions. But it has been made much worse by the twin threats of climate change and man-made intervention, which are hitting the region with increased frequency and ferocity.

Water – or rather the lack of it – has driven several geopolitical crises, diverting resources from one country to another and destabilising agrarian communities, including in Egypt, Iraq and Jordan.

Meanwhile, temperatures have hit ever higher levels in the Gulf since the turn of the century, including 55° C in Saudi Arabia in June and 53.7° C in Iran in 2017. 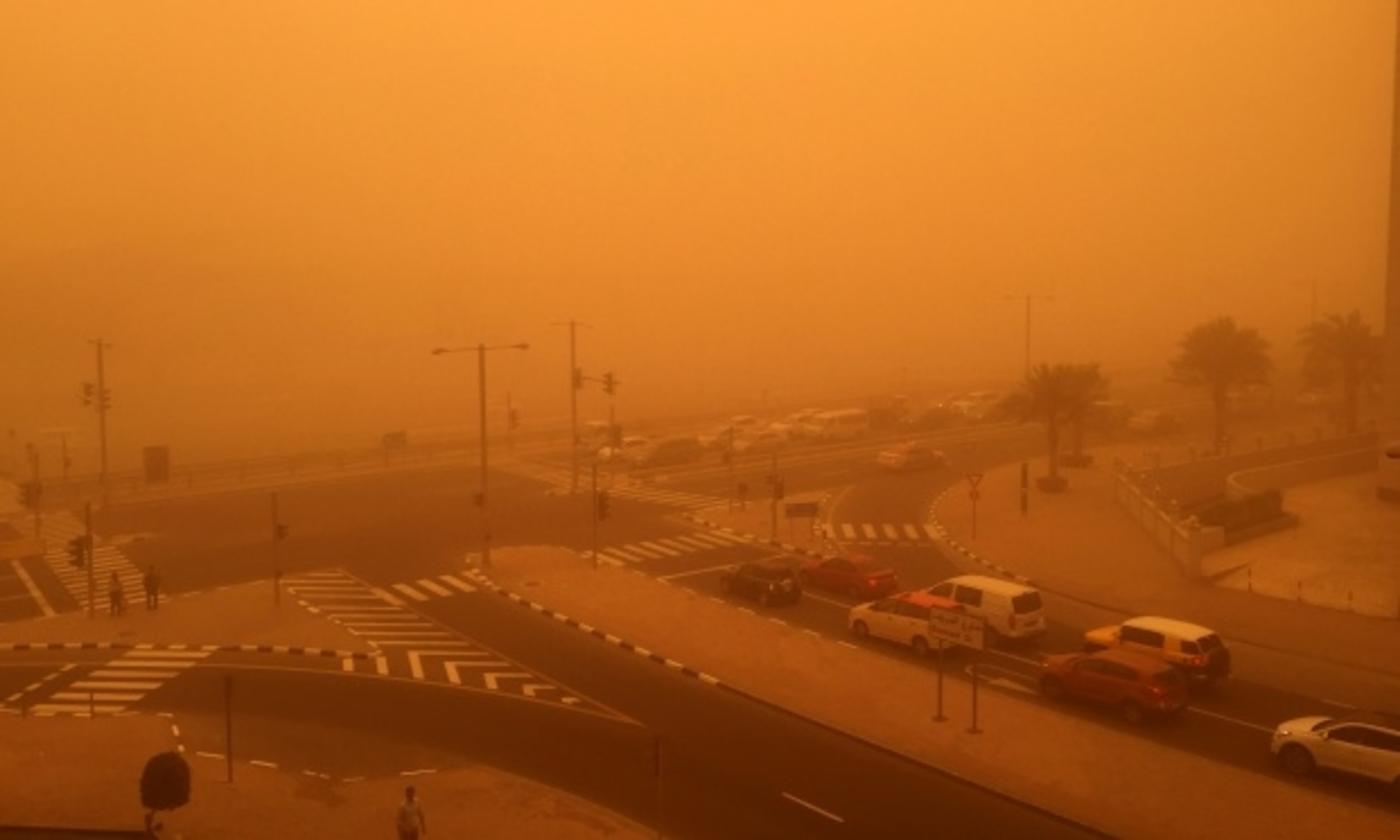 Dust and sandstorms are a perennial problem across the Middle East and North Africa, causing serious health problems and wearing down infrastructure.

The storms are a complex phenomena, governed both by human and natural factors. They do not obey borders nor a schedule, occurring during winter and spring in some parts of the region, while hitting others during the hot summer months.

What is not in dispute is that they are on the increase. Enric Terradellas, an analyst at the World Meteorology Organisation, reported in 2017: “In the Middle East there has been a significant increase in the frequency and the intensity of sand and dust storms in the past 15 years or so.”

In September 2015, a giant sand storm blanketed much of the Middle East, closing airports, causing multiple road accidents and a spike in hospital admissions. Visibility was so limited that fighting and bombing in Syria and Iraq temporarily came to a halt.

2. Egypt: The fight for water 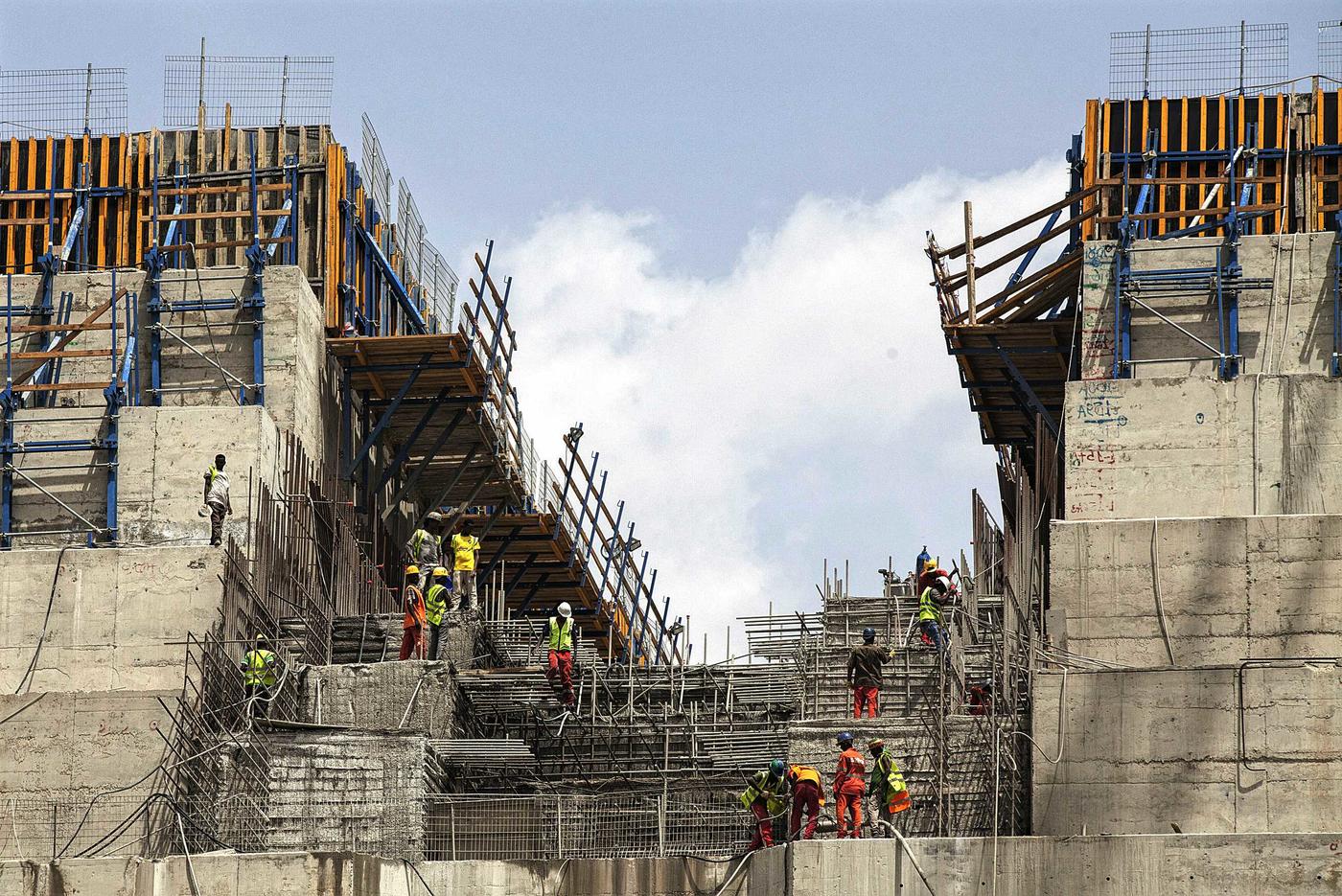 Ethiopia’s 6,500 MW hydroelectric dam is set to reshape the complex water politics of the Nile Basin – and Egyptians may be among the biggest losers.

The lavishly titled Grand Ethiopian Renaissance Dam (GERD), under construction on the Blue Nile since 2011, will be the largest in Africa when it is completed.

But in Cairo it is being watched anxiously: a rapid increase in demand due to population growth, severe mismanagement of resources and a lack of investment in water infrastructure have made Egypt one of the most water-stressed countries in the world, relying on the Nile for 90 percent of its fresh water.

“No one can touch Egypt’s share of Nile water,” said Egyptian President Abdel Fattah el-Sisi in November 2017. “It is a matter of life and death… this is our country and water must be secured for our citizens, from Aswan to Alexandria.” 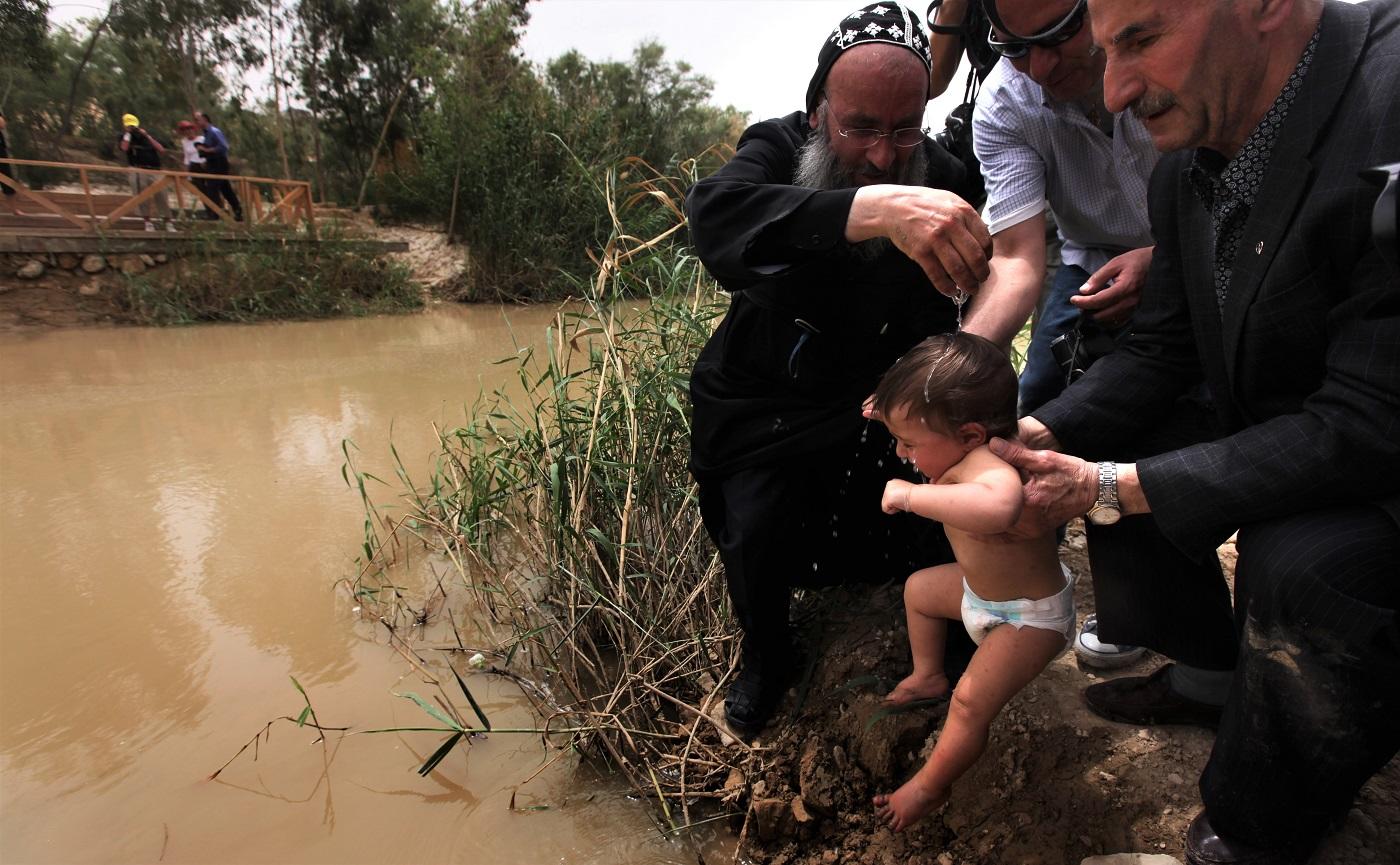 A Christian Orthodox priest baptises a baby by the Jordan River at the Qasr al-Yahud baptism site, on 14 April 2009 (AFP)

The Jordan is one of the most celebrated and sacred of rivers, crossed by the Israelites in Biblical times to reach their promised land and the site of the baptism of Jesus. But there is little that is holy about the river now, riddled as it is with pollution.

Abandoned hydroelectric schemes have also altered the course of the river, with devastating consequences for Jordan. It has been described by the UN as one of the most water-scarce countries on the planet.

According to an analysis by academics at Stanford University in California, the kingdom’s per capita water availability decreased from 3,600 cubic metres per year in 1946 to only 135 cubic metres in 2017 – less than four percent of that 70 years earlier.

4. Iraq: Farmers give up hope 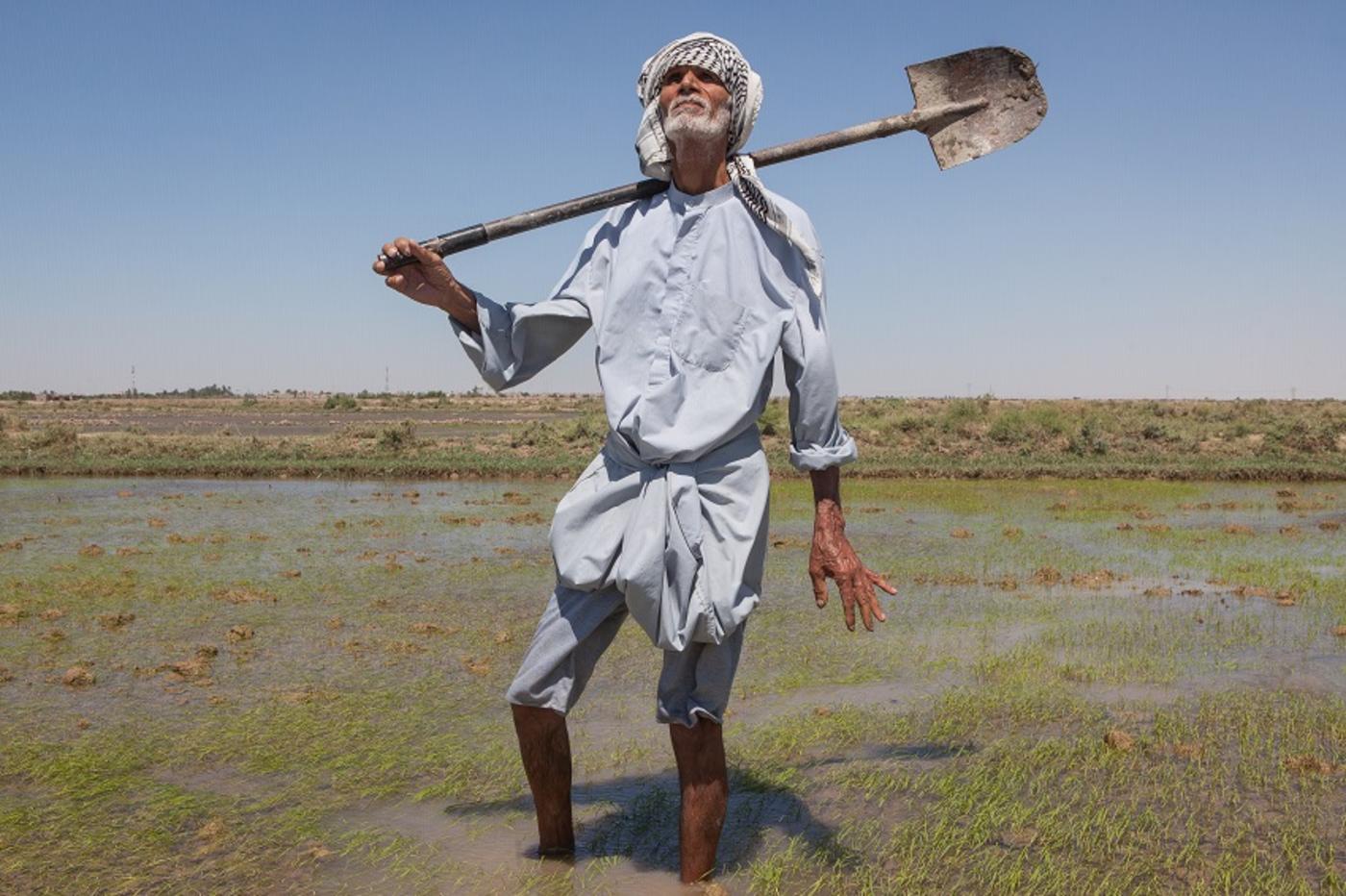 Once a water-rich country, southern Iraq has faced successive droughts and significant drops in annual rainfall, following the construction of major dams in Turkey and Iran since the 1970s.

Basra, the region’s main population centre, was once dubbed the “Venice of the Middle East” for its network of canals, whose levels have now sunk. Basra residents say salt seeping into the water supply has made it undrinkable and has sent thousands to hospital.

A lack of funds to help the agricultural sector is also preventing the development of Iraq’s agrarian infrastructure.

5. Alexandria: Sinking on all sides 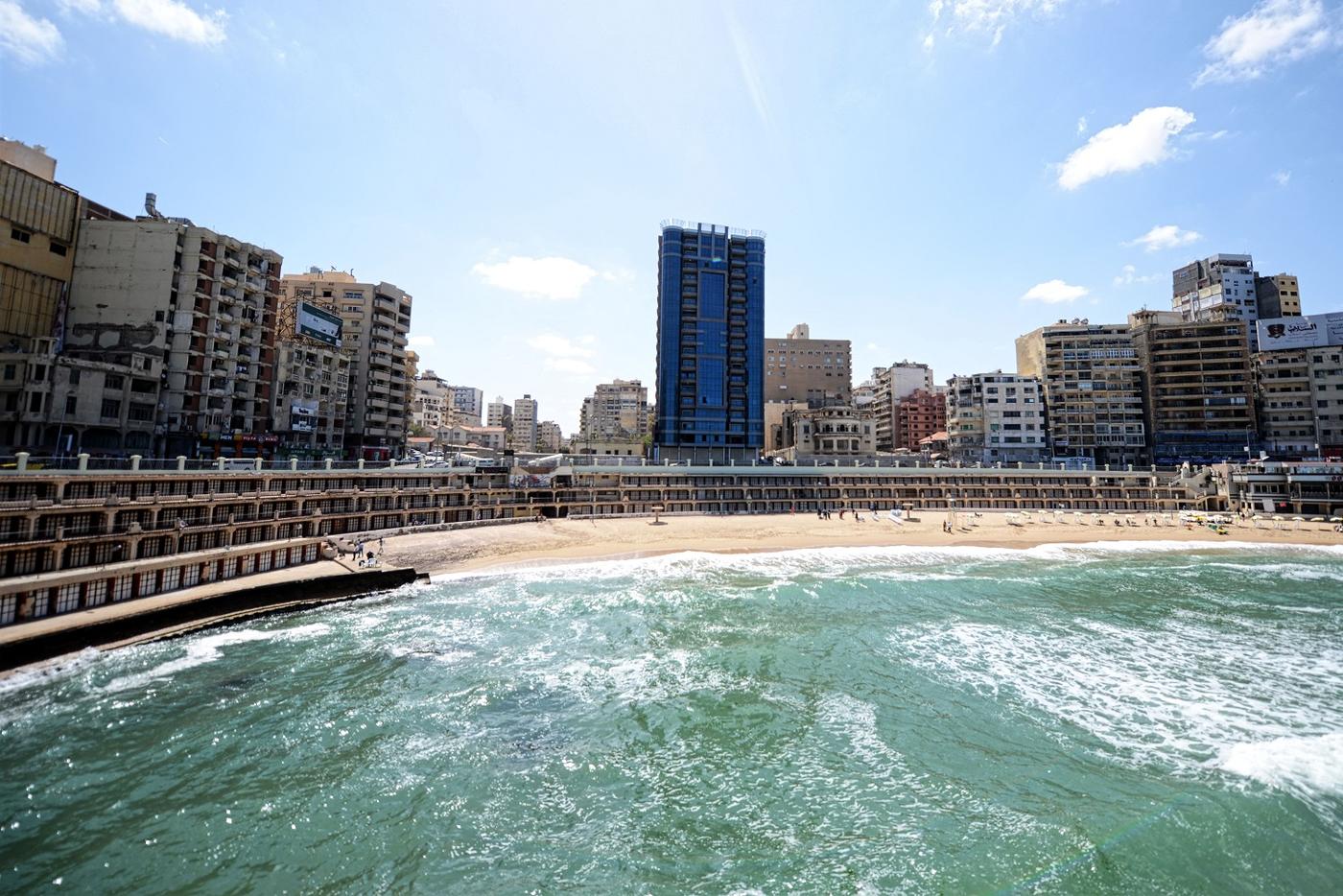 Stanley Beach in Alexandria in 2015: the ongoing battle between sea and land (AFP)

Alexandria, Egypt’s second city, with a population of more than five million, is sinking. The sprawling coastal metropolis, renowned as one of the world’s most ancient and venerable ports, is under attack from both the sea and from the land.

To the north, climate change is causing sea levels in the Mediterranean to rise, pounding Alexandria’s seafront. Meanwhile, levels of silt build-up in the Nile Delta to the south are eating away at the coastal foundations on which the city is built. 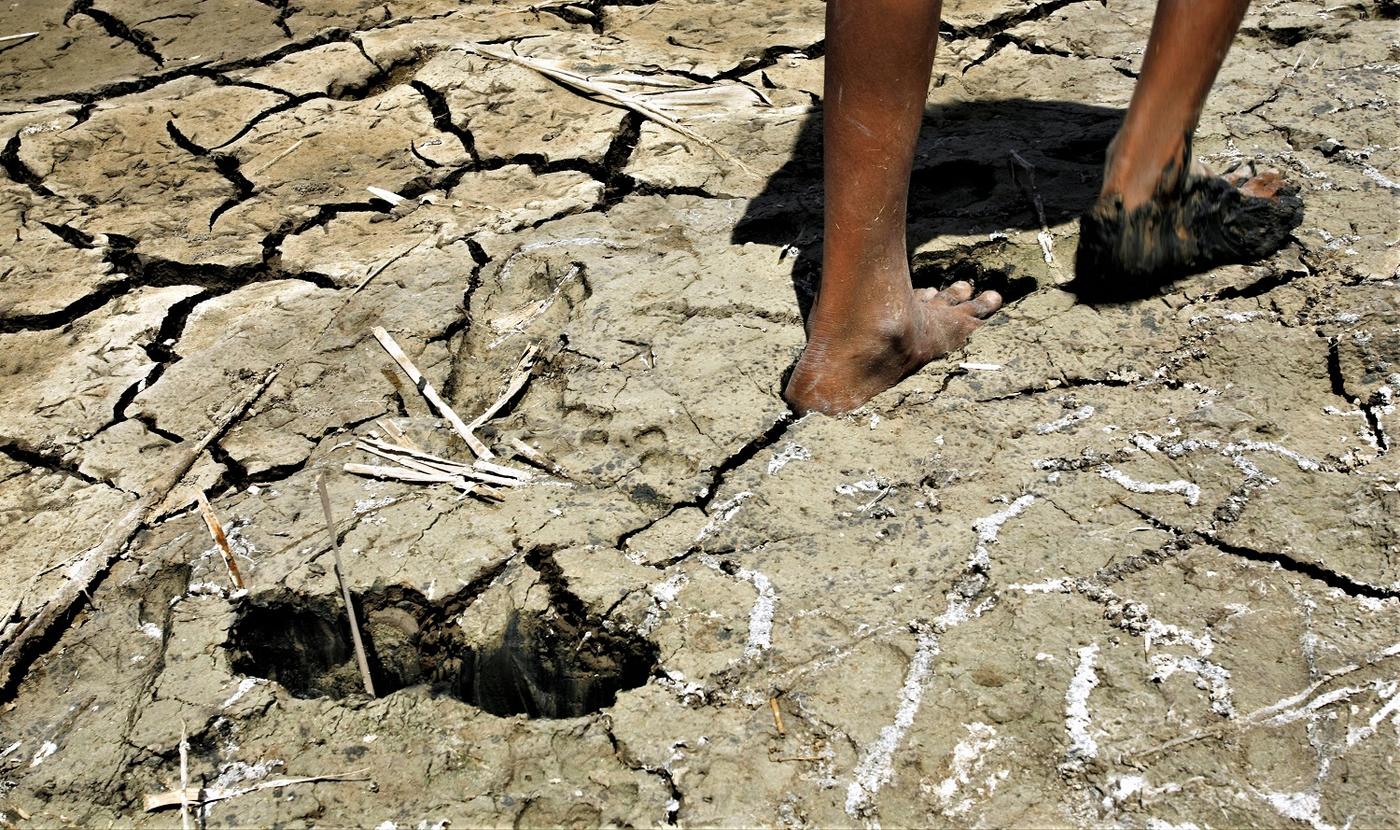 An Iraqi man walks on dry, cracked earth in the Chibayish marshes near the southern Iraqi city of Nasiriyah on 25 June 2015 (AFP)

Arab states are facing a water supply emergency for which they need a coordinated response, according to the UN Food and Agriculture Organisation, predicting that per capita resources will be halved by 2050.

The Middle East and North Africa have suffered more than any other region from water scarcity and desertification, problems being complicated by climate change, according to FAO director-general Jose Graziano da Silva.

In response, they needed to modernise irrigation techniques and coordinate water management strategies as a matter of urgency. 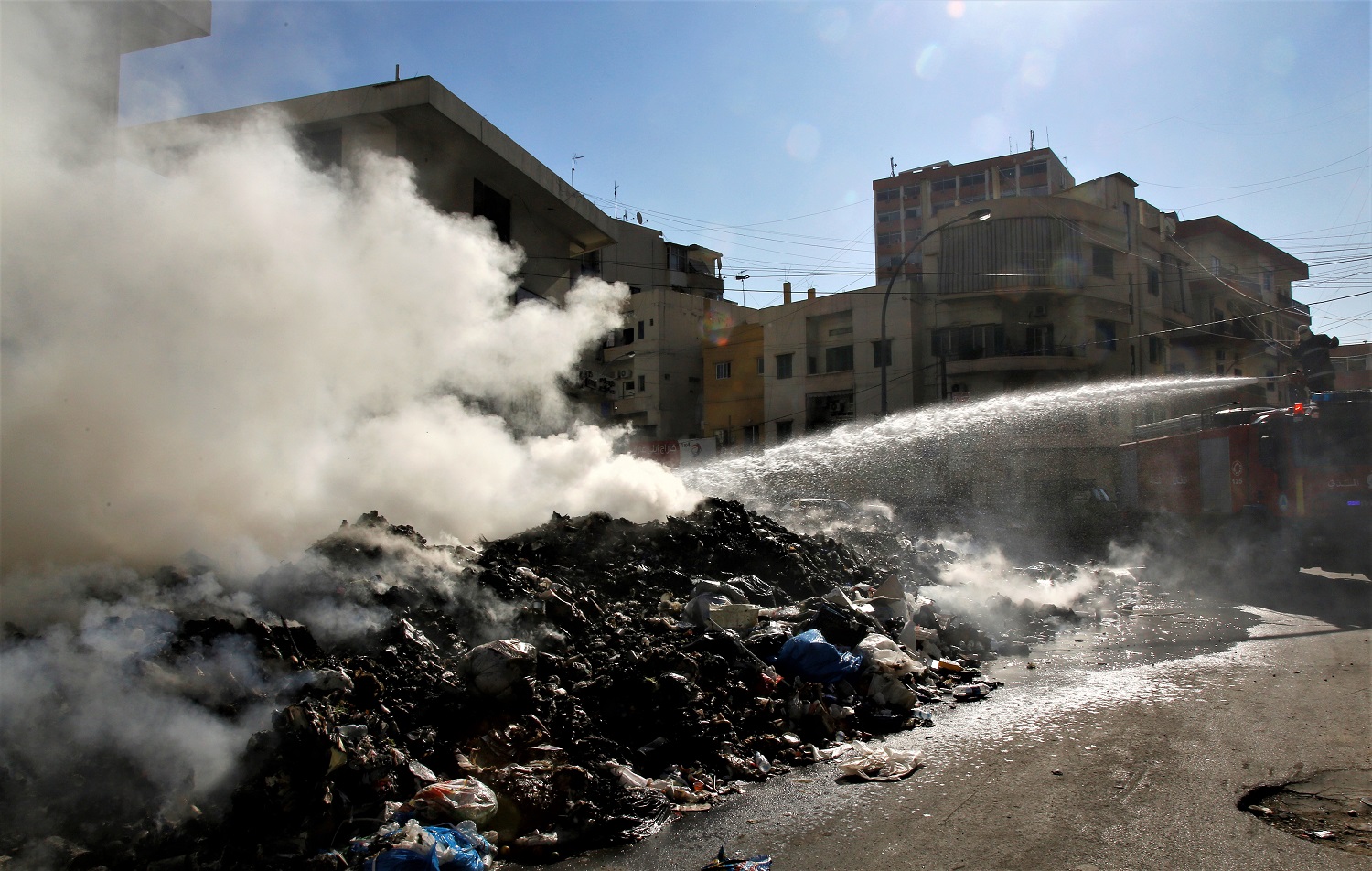 December 2015: Lebanese firefighters extinguish a burning pile of garbage on the side of a street in Beirut (AFP)

Lebanon’s rubbish collection scandal, which began in 2015, left mountains of rubbish on the streets of Lebanon, forcing residents to rally and demonstrate.

But years of waste mismanagement by the authorities also had detrimental effects on people’s health, according to a Human Rights Watch report in 2017.

In many instances, waste was also disposed of by incineration. “Those living near open burning reported an array of health problems consistent with the frequent and sustained inhalation of smoke from the open burning of waste,” said the report.

Open burning is a direct result of the Lebanese government’s mismanagement of its solid waste.” 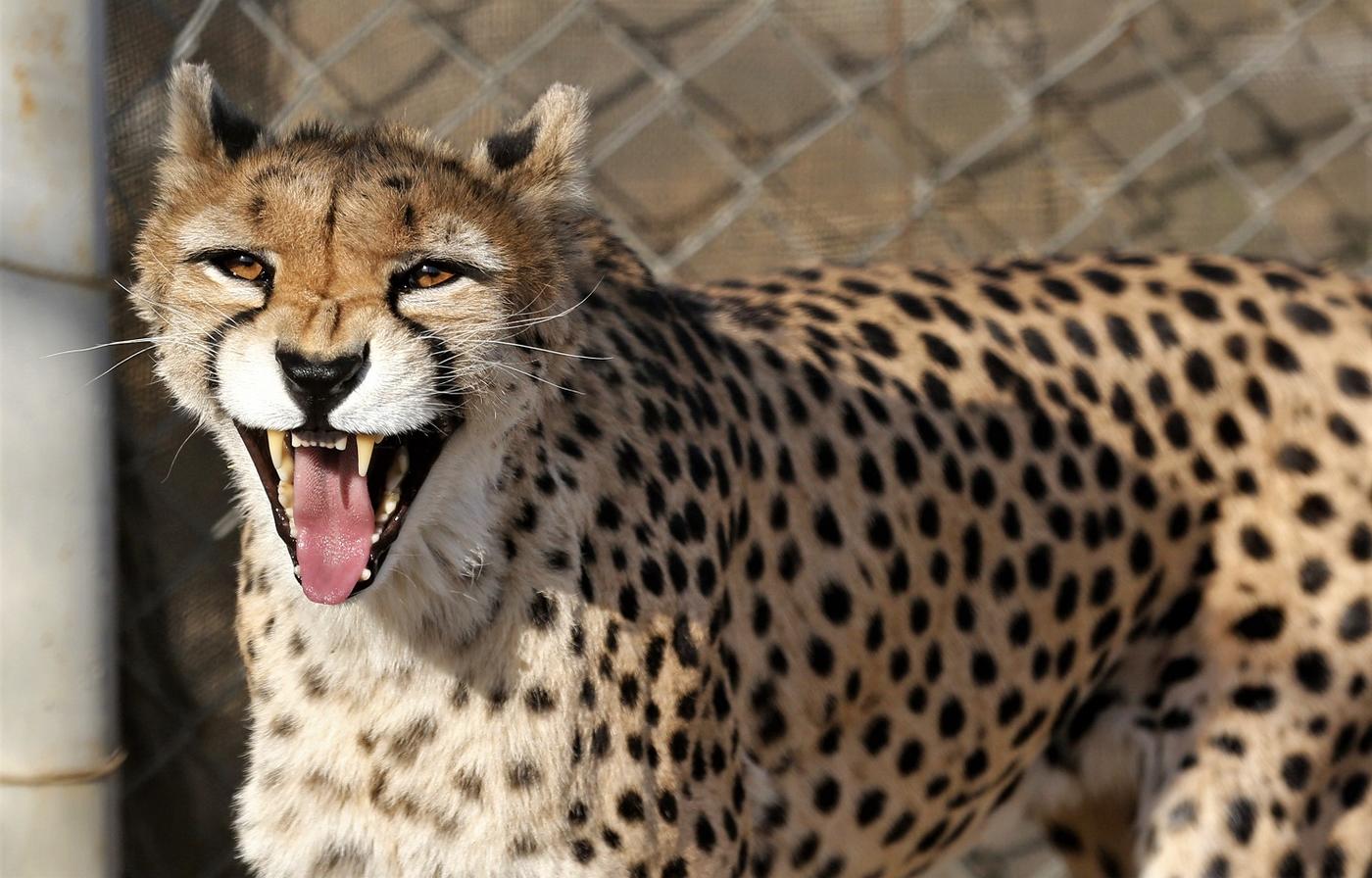 A female Asiatic cheetah named ‘Dalbar’ snarls in an enclosure at the Pardisan Park in Tehran, on 10 October 2017 (AFP)

Biodiversity – the range of life in all its forms – ensures the range and sustainability of the planet. But like elsewhere in the world, it is under sustained attack across the Middle East and North Africa.

In the UAE, reclamation schemes, such as Dubai’s Palm Islands and World Islands, have altered the geography of the coast and wave patterns have destroyed marine ecosystems.

Meanwhile, rare species such as the Persian leopard are threatened with extinction as road building and development, especially related to the oil and gas industries, encroach on their habitats. Wildlife experts say that there are only 50 Asiatic cheetahs still left in the wild. 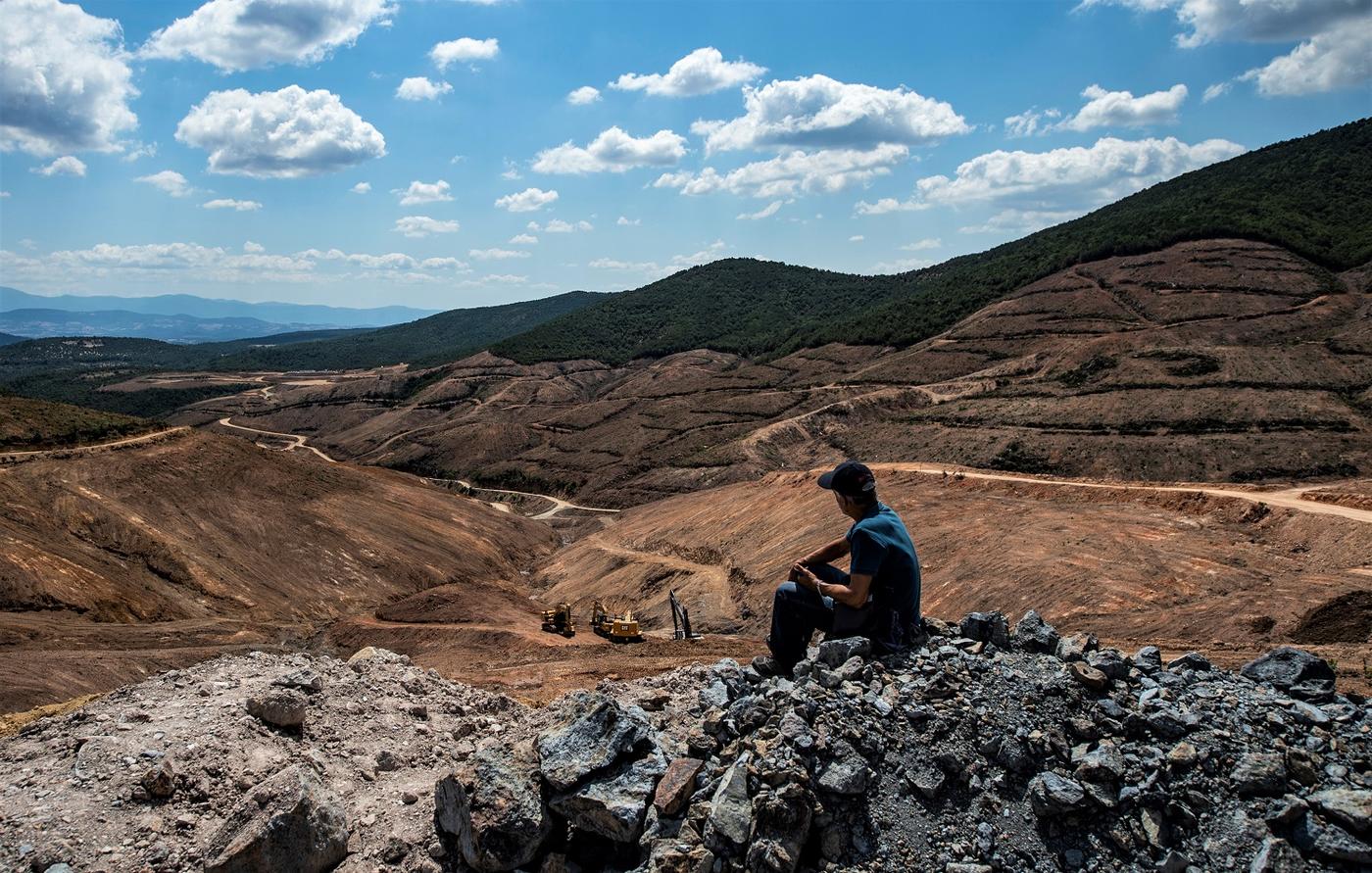 The site for the gold mine site project is in a deforestated area in Turkey’s north-west, near the town of Kirazli (AFP)

Campaigners in western Turkey have protested against a Canadian-owned gold mine project amid fears the deforestation will reduce a hilltop to an arid desert.

Public opposition to the site near Kirazli mounted after Dogu Biga Mining, the Turkish subsidiary of Canada-based Alamos Gold, allegedly cut down four times as many trees as it said it would in an environmental impact report.

Activists also fear cyanide will be used to extract gold in the mining project, contaminating the soil and water in a nearby dam. The Turkish government has rejected charges that the mine will damage the environment, Reuters has reported.

10. Dubai: The building boom heats up 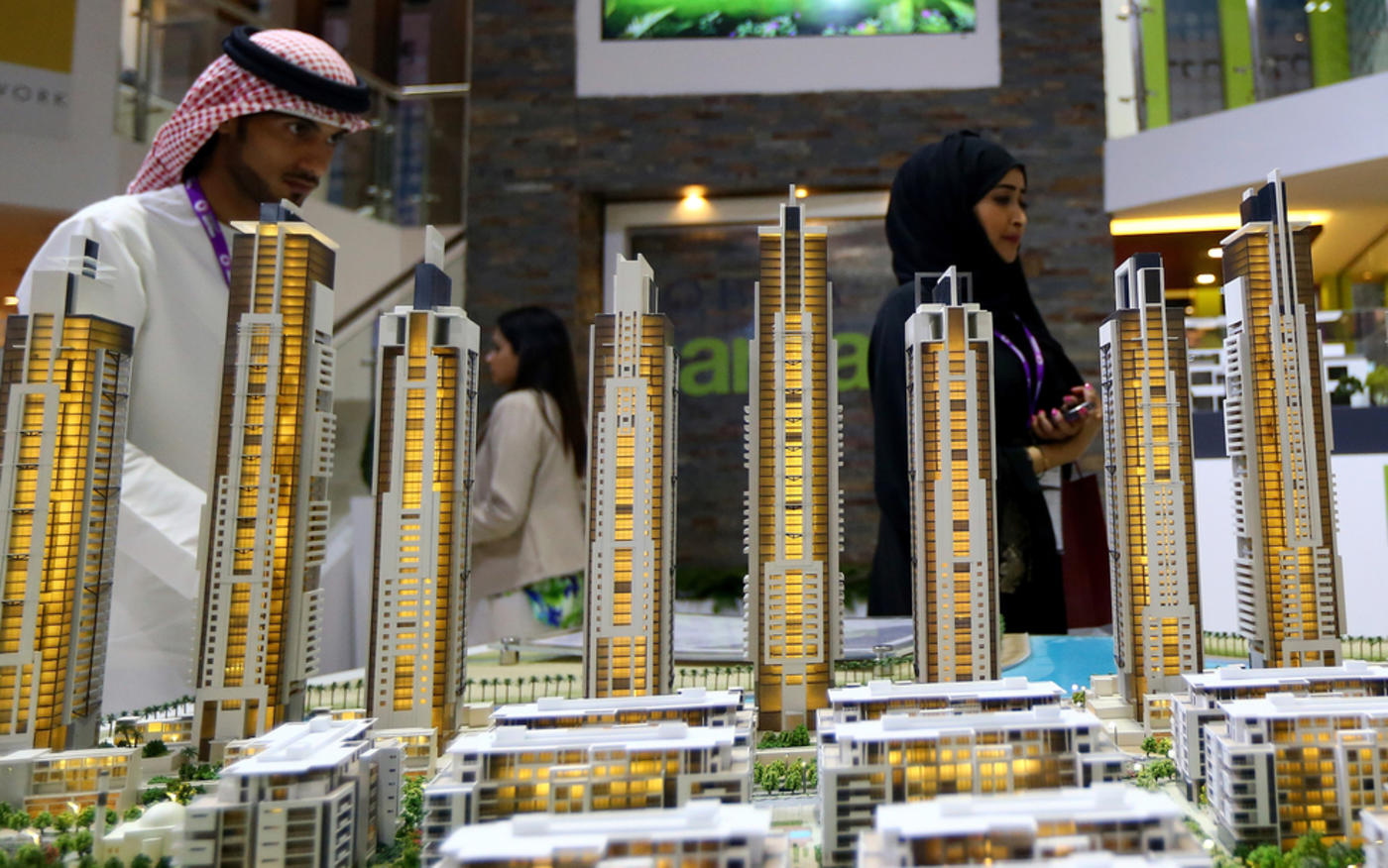 Visitors gather near a scale model of Sheikh Mohamed Bin Rashid al-Maktoum city at the annual Cityscape Global show, which has served in the past as the launchpad for grandiose projects, on 21 September

Dubai has one of the hottest climates on the planet. At the height of summer, temperatures can reach a high of 41ºC in the shade.

But the emirate’s urban growth – between 10 percent and 13 percent, year on year, for the past four decades – has boosted those figures. That’s despite concerted efforts by the authorities to tackle climate change

In 2016, Emily Elhacham and Pinhas Alpert from Tel Aviv University found that concrete, glass, roads and mega car parks had reshaped the environment and darkened what was – until the last quarter of the 20th century – near-white sand that reflected solar light back into space. Dark surfaces, in contrast, are excellent at absorbing heat.

11. Saudi Arabia: The heat of the Hajj 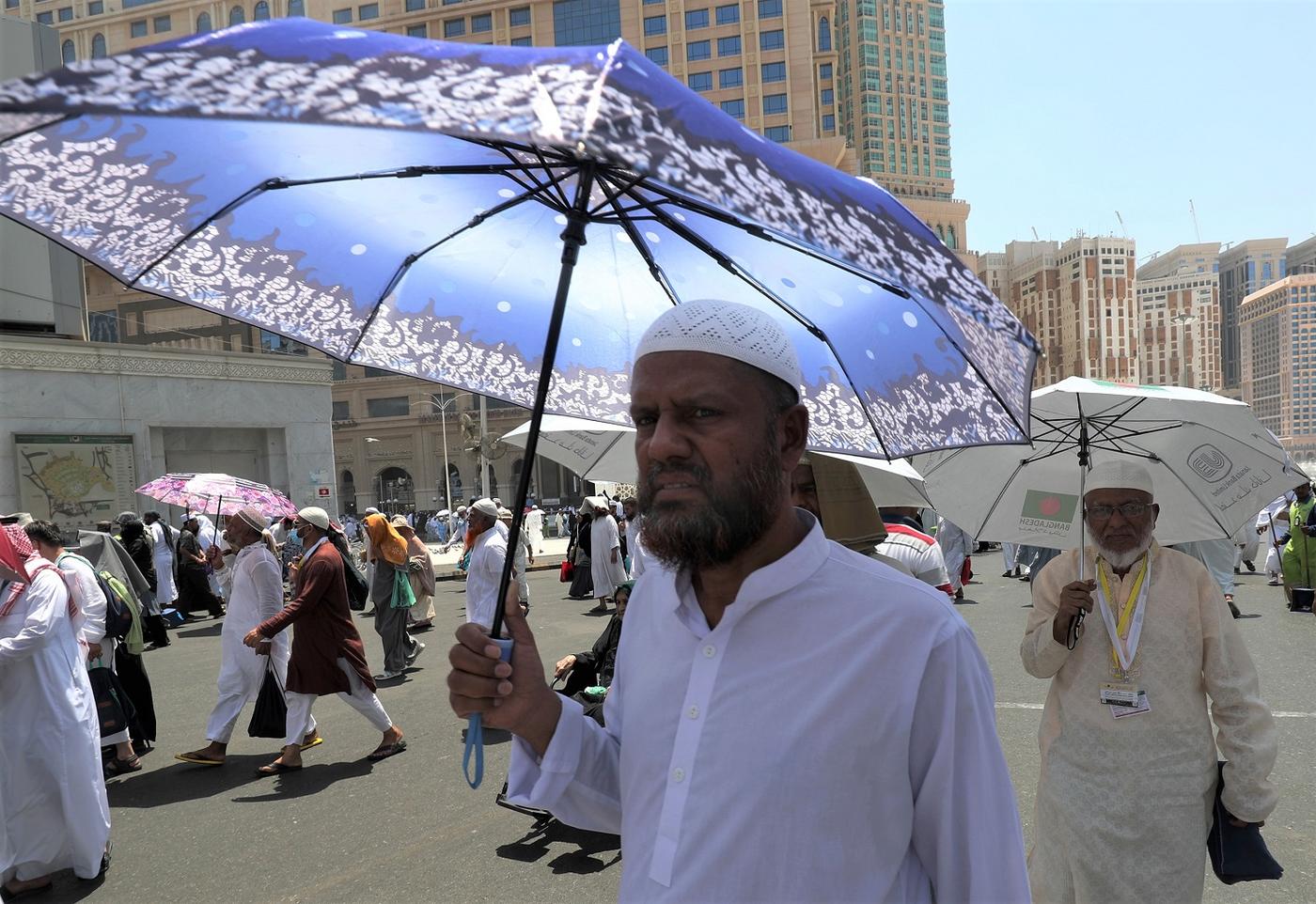 Muslim pilgrims walk in a street in Saudi Arabia’s holy city of Mecca on 18 August 2018, ahead of the start of the annual Hajj pilgrimage (AFP)

Pilgrims attending Hajj in Saudi Arabia may be at risk of extreme heat and humidity that is driven by climate change, according to researchers.

The pilgrimage, which lasts five days, draws an estimated two Muslims each year to the area around Mecca. The study, by MIT and Loyola Marymount University in Los Angeles, reported that conditions could worsen when the event – whose date changes every year due to the lunar calendar – falls during the summer.

The Hajj has seen deadly stampedes in recent years, including one in 1990 that killed 1,462 people, and one in 2015 that left 769 dead and 934 injured. Researchers say that the dates for both these events coincide with peaks in the combined temperature and humidity in the region.

Elfatih Eltahir, MIT professor of civil and environmental engineering, said in 2019: “If you have crowding in a location, the harsher the weather conditions are, the more likely it is that crowding would lead to incidents such as those.”

12. Sport: The cost of affluence 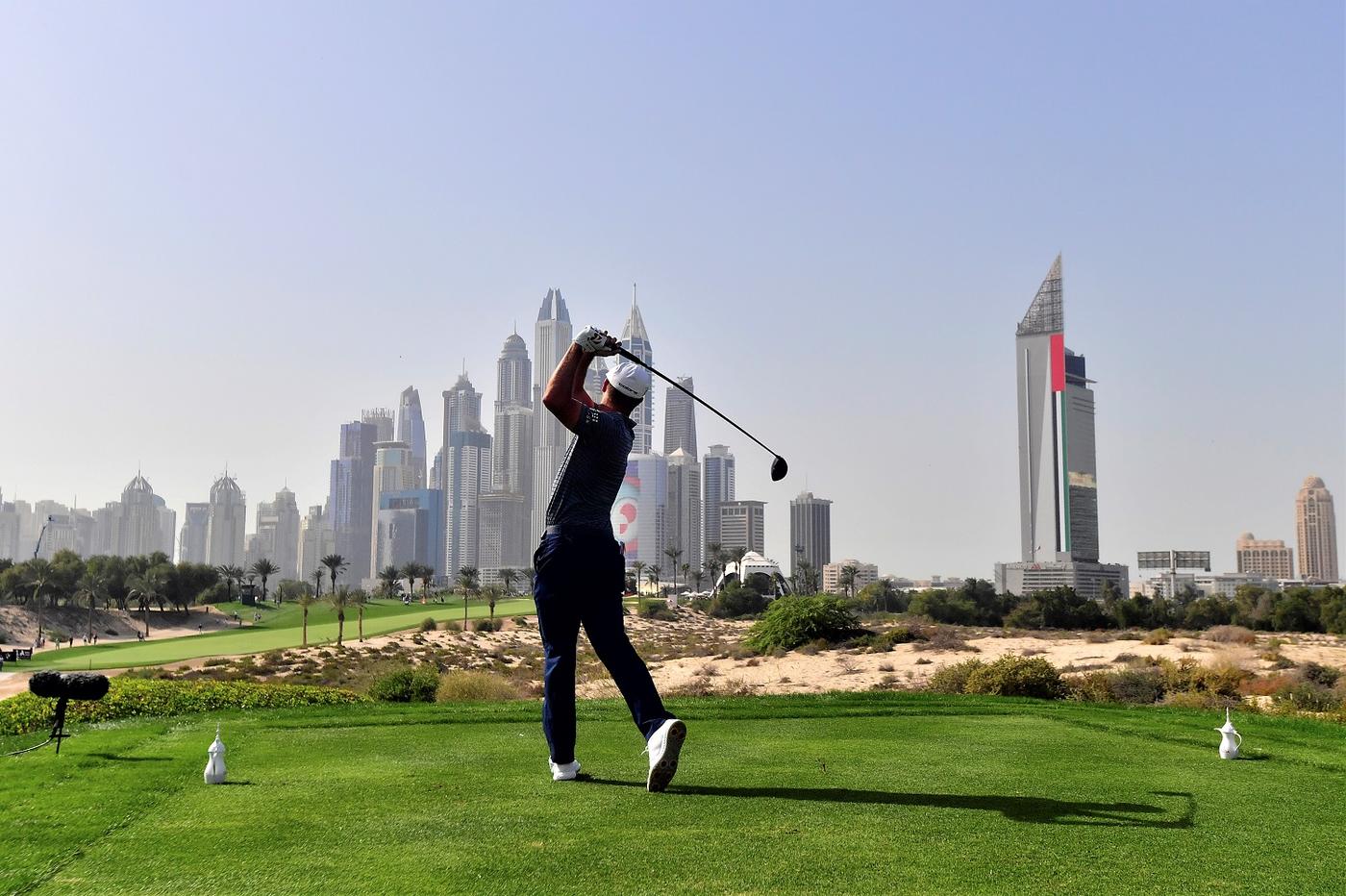 Bryson Dechambeau plays a shot during the Omega Dubai Desert Classic at the Emirates Golf Club in January 2019 (AFP)The Emirates Golf Club opened its doors in 1988, making it the first green facility in the region. Others soon followed in Dubai, Turkey, Abu Dhabi and Cyprus among others.

Saudi Arabia has also caught the bug, with at least 13 courses either under construction or in the planning stages. Like others around the region, they will be modelled on those found in better and cooler locations than the deserts of the Gulf.

It’s been calculated that golf courses in the US use, on average, 130,000 gallons of water each day. Those in the kingdom and elsewhere will likely use many times that amount, as well as fertilisers, pesticides and herbicides to keep them alive. All these chemicals eventually feed into precious groundwater supplies, potentially causing pollution problems. 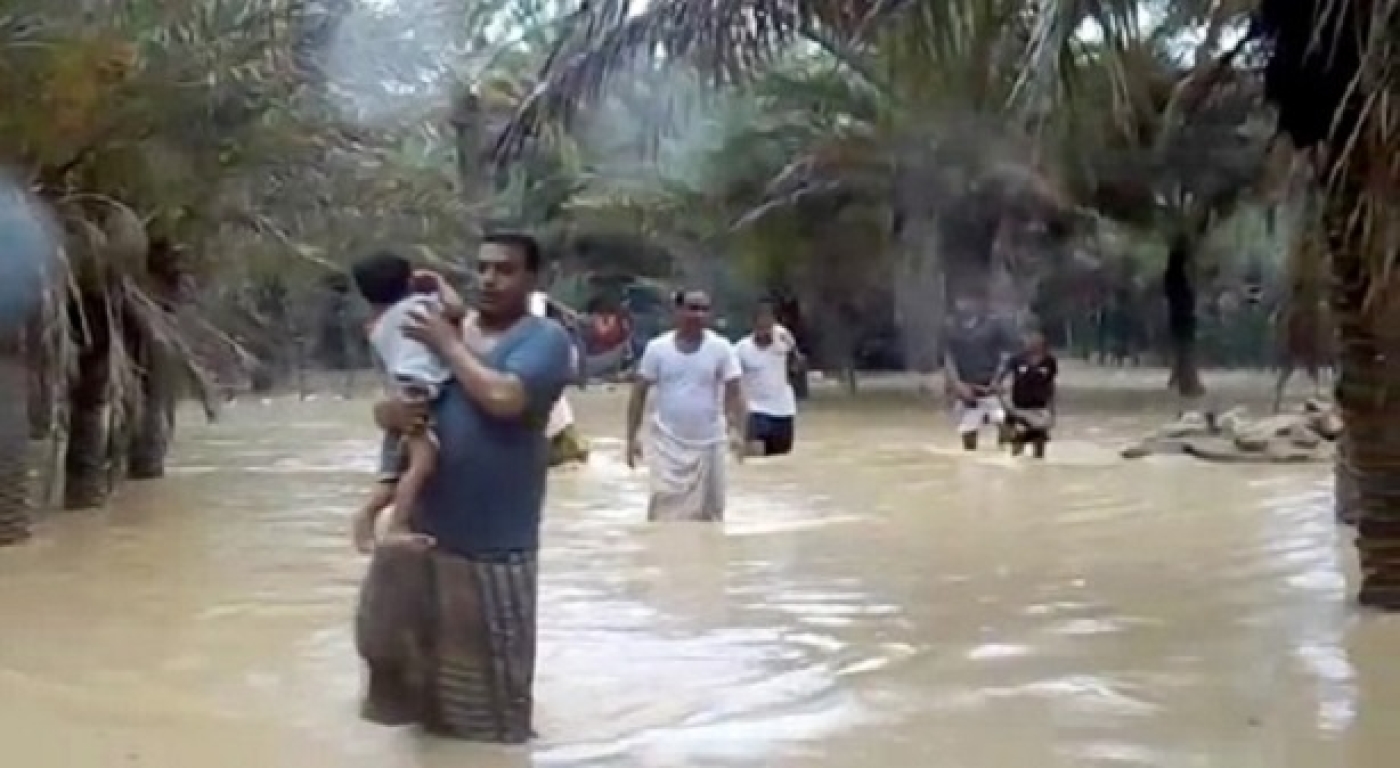 People walk through floodwater as they evacuate from Socotra, Yemen (Screengrab/AFP)

The Yemeni island of Socotra has been hit by unprecedented weather events during the past five years.

In 2015, two rare tropical storms – Cyclone Megh and Cyclone Chapala – hit the archipelago, nicknamed the “Galapagos of the Indian Ocean” due to the uniqueness of its wildlife and fauna, within the space of a week.

And in May 2018 Cyclone Mekunu tore through the island and left at least 15people dead.

Other extreme precipitation events in the Gulf include the torrential rain which hit Qatar in October 2018, dumping almost a year’s worth of showers on the emirate in one day.

The future? It’s going to get worse 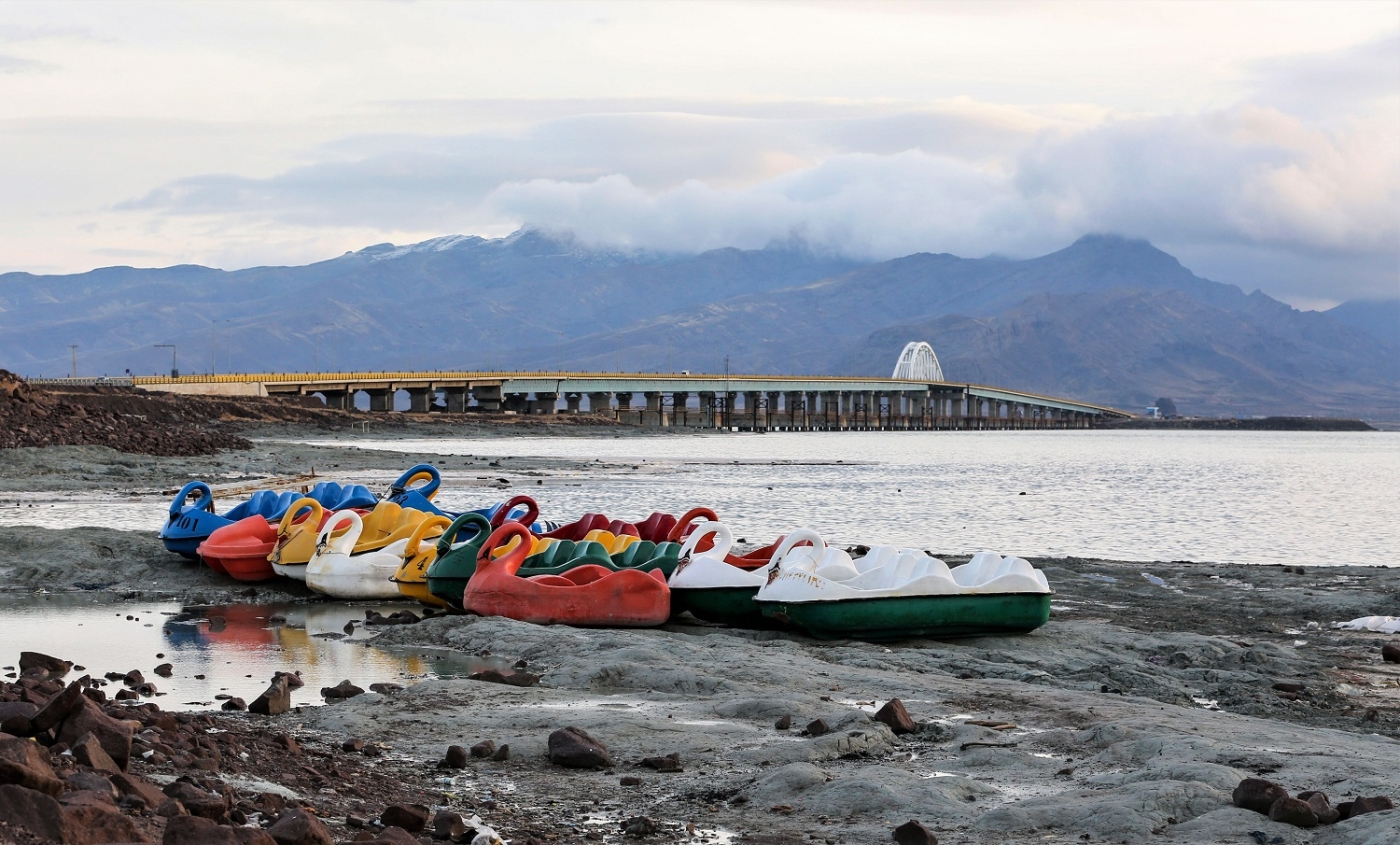 Lake Urmia in NW Iran: once the largest in the Middle East, its surface shrank by 88 percent from 1995 to 2013 due to drought, over-farming and dams (AFP)

In 2017, scientists warned that climate change means that MENA is susceptible to some of the more severe consequences of warming, including lethal heat waves, extensive drought and rising sea levels.

Dr Benjamin Cook, a NASA scientist at the Goddard Institute for Space Studies, told Middle East Eye: “The MENA region and the Mediterranean can expect reduced rainfall, increased intensity and occurrence of droughts, and much more severe heat extremes,” he said.

The region’s governments also have a dubious record when it comes to dealing with climate change.

But while Egypt was mid-table at 21st, Turkey came in at 47th, Iran was 55th and Saudi Arabia was last at 57th, a position it has held for the past few years.