In Beirut, women lead show of unity after night of tensions

After night of partisan clashes in Ain el-Remmaneh, Christian and Muslim women lead demonstrations in Lebanon's capital, Beirut, to show unity between the different communities.

The Beirut suburb of Ain el-Remmaneh woke up shaken. On Tuesday night, supporters of Hezbollah and the Amal Movement clashed with local supporters of the Lebanese Forces party, raising fears of sectarian tensions in the neighbourhood where the Lebanese civil war began in 1975.

To quell the perception of divisions, on Wednesday a group representing mothers from Ain el-Remmaneh and the neighbouring Shia neighbourhood of Chiyah organised a protest asserting a message of unity.

In a display of coexistence and solidarity, dozens of Christians and Muslims took part in the women-led demonstration, marching from Ain el-Remmaneh to Chiyah, chanting against sectarianism and violence.

The two neighbourhoods sit on the sectarian demarcation lines of the bloody 15-year civil war.

“Of course we were all scared because of the sensitivity of this area, and everyone knows that the civil war started here,” Valentina, a participant in Lebanon’s protests and a resident of the area, told MEE.

Residents told Middle East Eye that the demonstration reaffirmed something they had always known – that the two neighborhoods have remained united in spite of politically motivated tensions over the years.

Rejecting sectarianism
Despite the uncertainties of a political deadlock in the country as mass protests against corruption continue, Wednesday’s protesters said they had faith that the situation would not devolve any further.

Starting at four in the afternoon, residents from both neighbourhoods gathered in front of a storefront in Ain el-Remmaneh, steps away from where the standoff had taken place the night before.

“No war, no violence, no sectarianism,” the group of women chanted, as they began to march down the street towards Chiyah.

Carrying Lebanese flags, white rose and singing the national anthem, the group was met by cheers as it entered the neighbouring town, where locals greeted them from the roadside and from balconies up above. 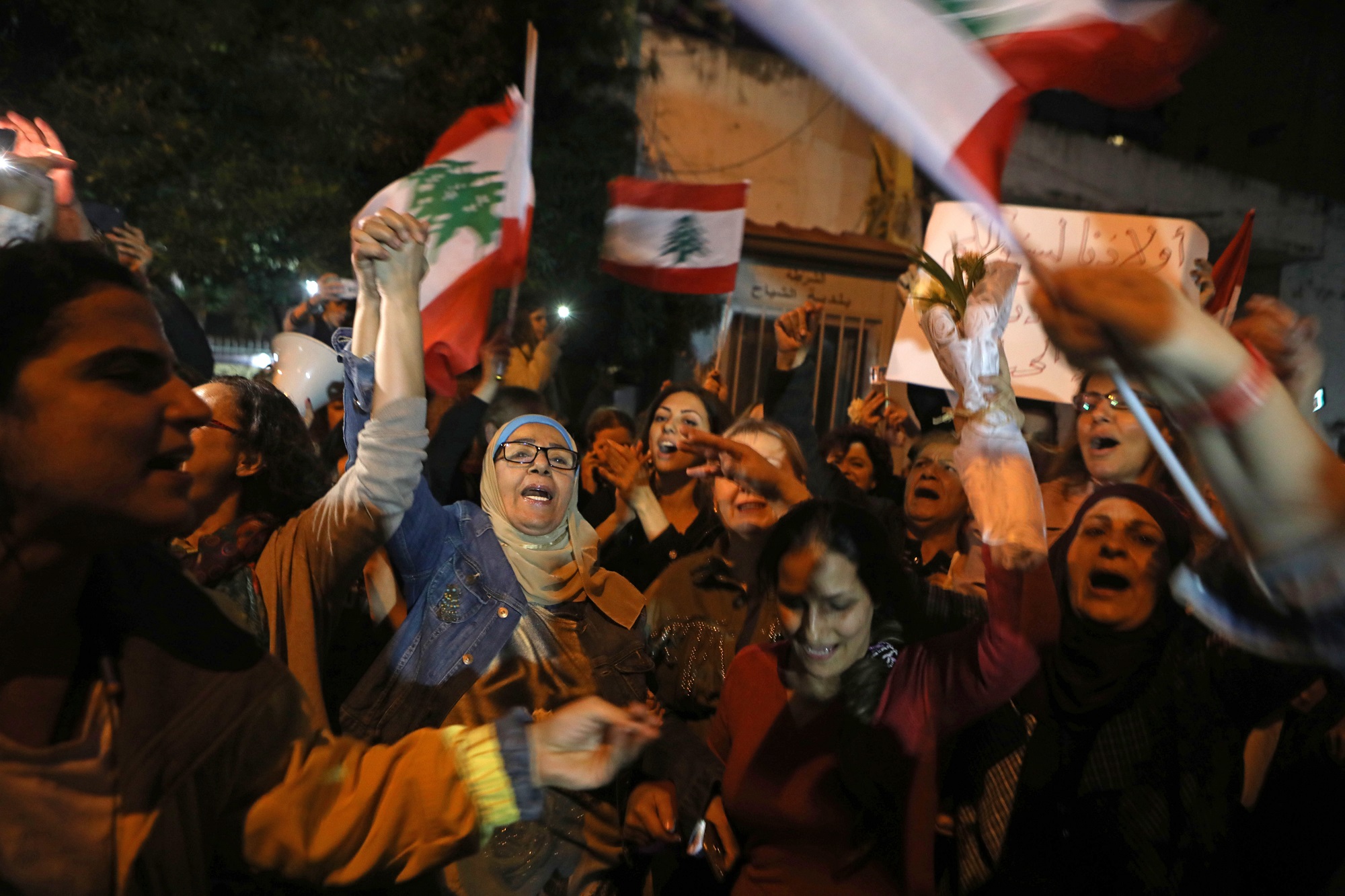 ‘No war, no violence, no sectarianism,’ women marchers chant (AFP)

Marchers urged their neighbours to join them in the street and families tossed rice in celebration, matching their display of unity by hoisting national flags of their own.

Zahra Housseini, a woman who lives in Ain el-Remmaneh, said she was surprised by the events of the previous night.

“I have been here for 22 years, and we are one hand,” she told MEE. “I came down to show all the people that there is no one who can divide the Muslims and the Christians or any sects, to show everyone that no one can come between us.”

Aaliya Khalidi, a protester who held a sign that read “The revolution is female,” said the women-led nature of the day’s demonstration, which mirrored that of the ongoing Lebanese protests as a whole, was vital for preventing escalation.

“Previously, women did not have a prominent role in the Lebanese war, and today, we’re going to make sure [a war] doesn’t happen again,” Khalidi said.

‘Stronger than this’
Although some demonstrators faulted Lebanon’s political parties for the violence, accusing them of intentionally trying to stir up sectarian tensions to hold onto power, others, including Hanaa, blamed the country’s economic situation.

“All of us know that these areas are of course deep in poverty, there are poor people, there is unemployment, so these young men are emotional,” she told MEE.

“Any mere disorder, any provocative words, some of them will come down. The army is not enough. Of course the mothers have a role, they must enter and control the situation.”

As dusk fell and rain began to drizzle, an argument broke out as one demonstrator began to speak against Hezbollah Secretary-General Hassan Nasrallah.

Still, after the moment passed without incident, police ushered participants to gather along the side of the road and opened streets to traffic once more.

Hassan Ayyad, a young man originally from Chiyah, said that it was impossible to preclude the possibility of further tensions in the future, but stressed that as long as the two neighbourhoods stick together, the situation will remain stable.

Hiding from the rain under an awning at the end of the day, Dany, a resident of Ain el-Remmaneh, said that any efforts to push locals towards conflict had failed.

“There are people trying to get us to return to what happened before,” he told MEE. “But in the end, Ain el-Remmaneh is stronger than this.”