The building locally known as the "Turkish Restaurant" has become a symbol of the recent Iraqi protests, as it overlooks both the Green Zone, Iraq's centre of power, and Tahrir Square, the main protest location.

The crumbling, winding stairs of the building known locally as the Turkish Restaurant are unlikely to pass any international safety standards. And yet, day in, day out, hordes of young protesters traipse up and down them carrying food, water and other supplies for the activists occupying the 14-storey high structure.

The austere concrete building, which overlooks Baghdad’s central Tahrir Square, was bombed out during the 2003 US-led invasion of Iraq that toppled Saddam Hussein, and has been left derelict ever since.

It stands as an enormous testament to Iraq’s state of disrepair – like so much of the country, there has been little or nothing in way of improvement or renovation since the war.

Now, after being occupied by protesters since the beginning of October, the Turkish Restaurant has become the headquarters for what many are deeming a new revolution in Iraq – an uprising against a corrupt elite that since 2003 has failed to provide jobs, security and services while ferreting away billions of dollars of the country’s oil wealth into their own pockets.

The building is now draped with banners supporting the uprising and calling for the UN and other international bodies to intervene in the country to prevent any further addition to the at least 319 people who have died since last month.

Hanging from the edges of the banners, reachable on some of the lower floors of the building, are bottles of Pepsi, which have also become a symbol of sorts after demonstrators began to use the soft drink to counteract the effects of tear gas.

“We came here to support all the poor people here in Iraq,” said one activist on the upper floors of the building. “There’s no jobs, nothing here. So we came here to occupy this building.”

Some protesters smoke shisha while hanging their legs precariously off the edge of the building’s floors. Many exhibit battle scars.

“We call this building Uhud Mountain,” said the protester, in reference to an early battle in Islamic history.

“This [building] is going to be the history of the revolution in Iraq.”

Like many in the building, the activist declined to give his name or allow his picture to be taken, fearing they would be arrested shortly after being identified. 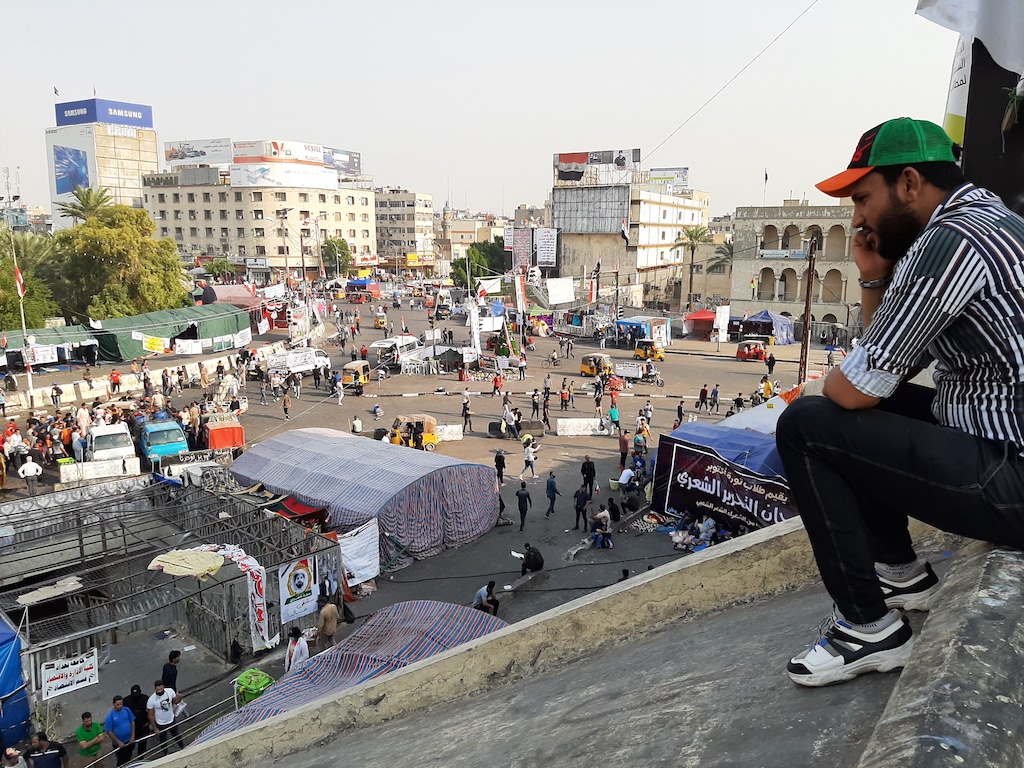 The activist pointed out a picture of a young man adorning one of the walls of the floor, only metres away from an unprotected sheer drop down onto the teeming streets bellow.

He said it was a friend of his who had been shot dead by security forces on the Jumhuriya bridge leading out of Tahrir Square over the Tigris around a month ago.

A few floors down in the restaurant’s former car park, pictures of many of the “martyrs” line one of the walls. The victims range from across all ages, both male and female.

One victim can been seen with a white gas stream coming out of the back of his head.

“Boom,” said one activist. “Tear gas in the head.”

Another he points out had been a doctor treating victims of the security forces.

‘The fear is gone’
Heavy importance is placed on commemorating those killed – the face of one slain protester in particular, Safaa al-Saray, adorns many of the walls around the Turkish Restaurant and in Tahrir Square.

Saray, a noted social media activist, was hit in the head with a tear gas cannister and killed in October.

Despite the dangers, the mounting death toll has done nothing to dissuade activists.

“We saw people standing in solidarity with each other, there is less fear now. The fear is gone. People are now more aware, and we lost a lot of people,” said Miriam, a doctor who volunteered to give aid to the protesters.

Like many other such occupations around the world, the protesters in the Turkish Restaurant have attempted to maintain a degree of political and cultural life in the building. 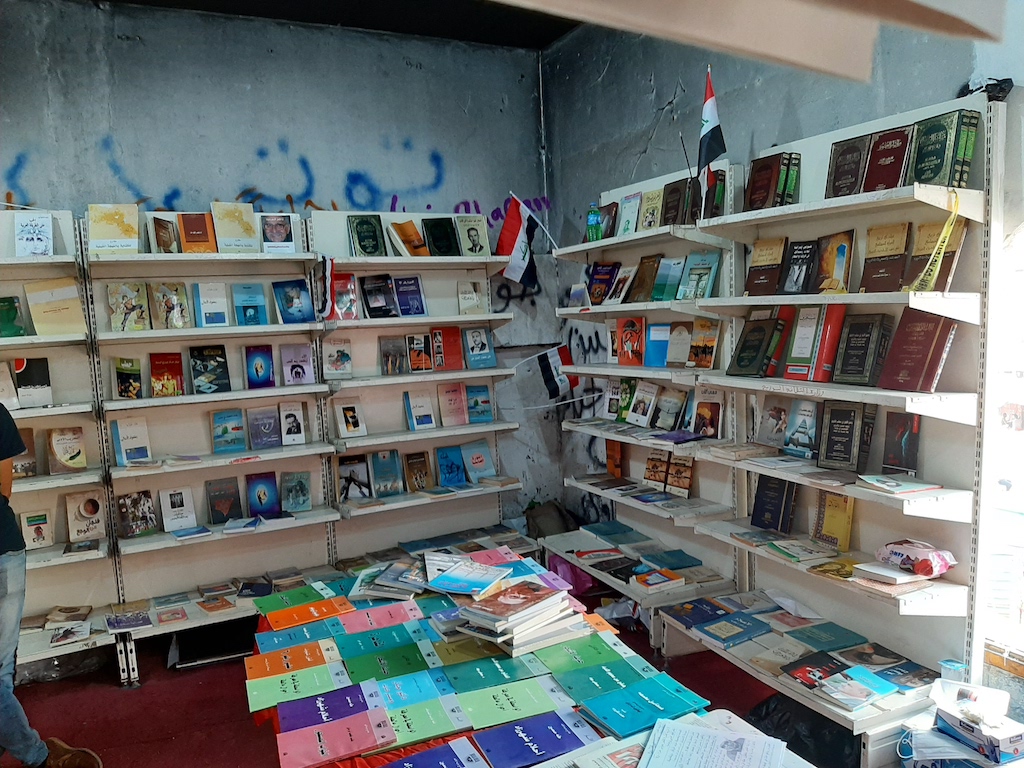 Activists bring up food and supplies in carpets attached to ropes hanging down the side of the building. A few have spoken about restoring electricity to the building. Another floor houses a library.

“We have everything here,” said Mohammed, the library’s organiser. “Everybody donates to it.”

Nest of corruption
The top of the Turkish Restaurant provides a clear bird’s eye view of the protesters’ battleground.

The Jumhuriya bridge, crossing east over the Tigris, leads to the area commonly known as the Green Zone, the heavily fortified area that houses the Iraqi parliament and numerous other state institutions.

Though fierce clashes have taken place in past weeks on the bridge, with protesters attempting to push through into what they view as the ultimate nest of corruption, the bridge is now blocked off by barricades erected by both the protesters and security forces. 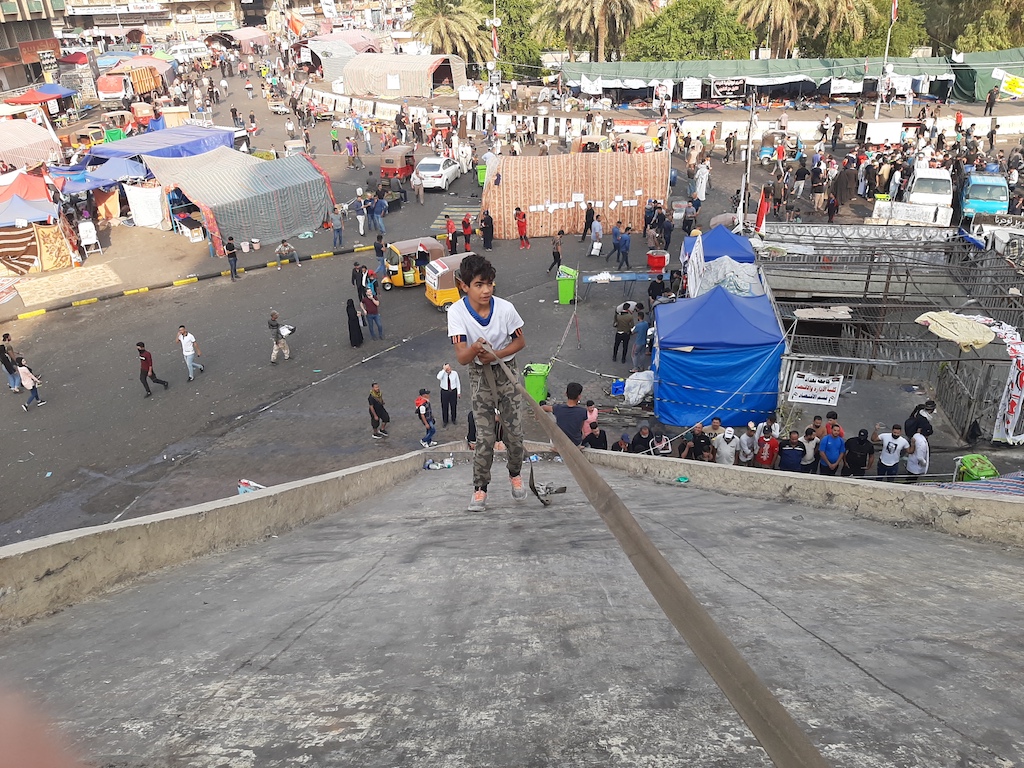 Looking north can be seen Khulani Square, which became the site of fierce clashes on Sunday afternoon and evening.

Live ammunition and tear gas were fired into the crowd in an attempt to push them back towards Tahrir Square.

On Monday, the UN Human Rights Council will hold a Universal Periodic Review session to examine Iraq’s human rights records, at which the tactics and weapons used by security forces will come under scrutiny.

Though supposedly a non-lethal form of crowd control, photos have emerged of tear gas cannisters puncturing the skulls of activists – one particularly gruesome image showed a dead protester with a cannister lodged in his eye.

Protesters have also repeatedly claimed that the tear gas being used is stronger than the kind that might be deployed in the likes of France or Turkey. Many have also spread an unlikely rumour that the security forces are using sarin, a form of nerve gas.

Nerve gas or not, an unidentified green smoke could be seen emanating from the direction of the violence on Sunday.

Injured protesters were carried away from the scene by tuk-tuks – now also an icon of these demonstrations – to makeshift medical camps staffed by volunteers. 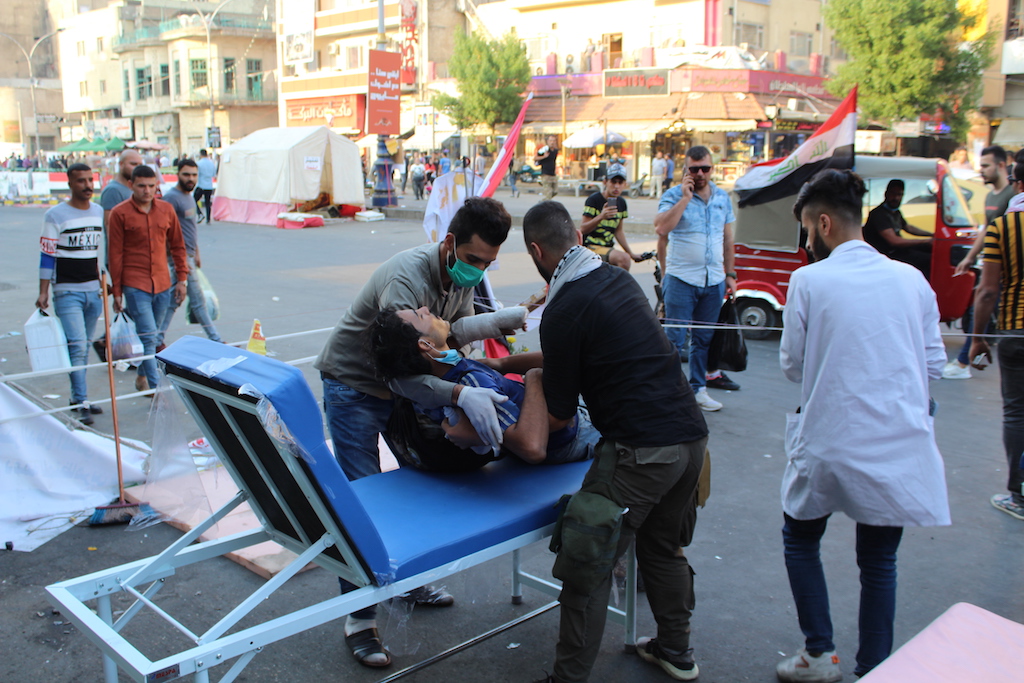 “We were protesting our rights – we want a country,” said Abdul, a college student being treated for shrapnel wounds.

“They [the government] should all leave because they’re not representing anyone – no security, no services, no jobs. All the the political parties are harmful.”

Some of the other demonstrators displayed bullet wounds, others keeled over and vomited – one even had to be treated after his foot was run over by a tuk-tuk.

Another activist was carried to a bed writhing in pain, but sprang back up and ran straight back in the direction of the clashes after receiving treatment.

“He’s doing that because he’s lost hope” said Faleh, a medical volunteer. “His body language when I spoke to him, he is telling me ‘I have nothing to lose’.”

The Jumhuriya bridge occupation, heavily reinforced by protesters, appears to show no sign of being removed any time soon.

Despite the mounting death toll, and the continuing pushback from the security forces, protesters remain defiant and pledge to continue their efforts.

At sunset on Sunday evening, the occupiers sang songs and chanted defiant slogans. 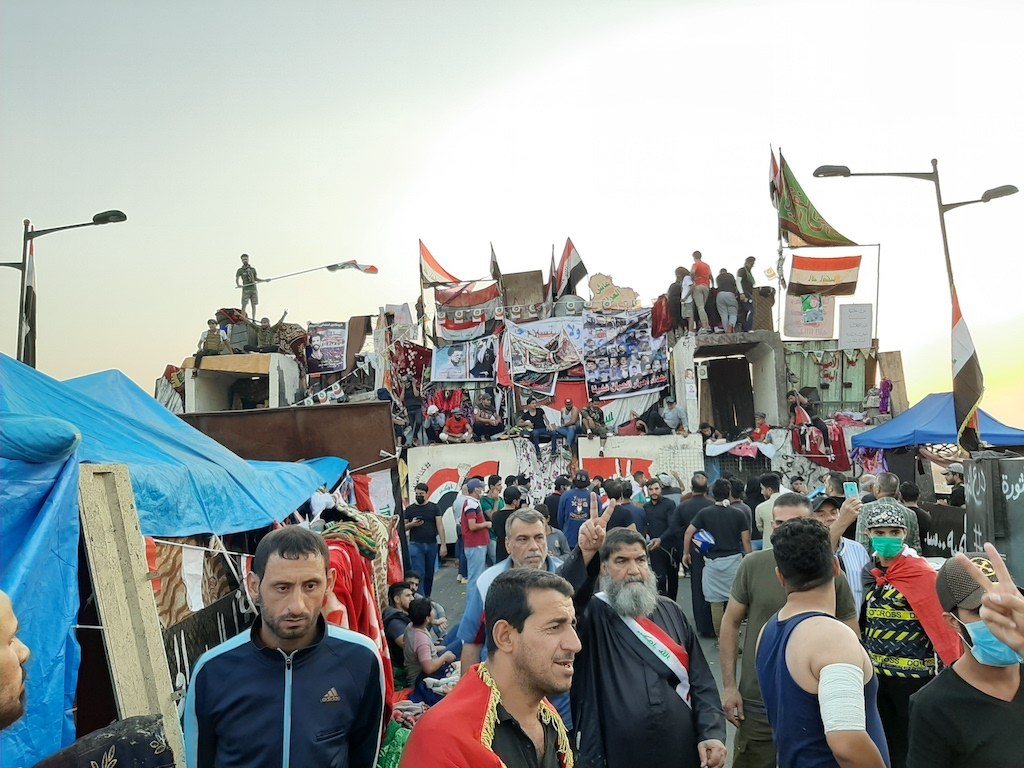 One protester, Hamza, said they had had very little in the way of attacks from security forces since the barrier was erected. Sheet metal and concrete blocks have made the blockade fairly impervious to bullets.

“We wanted to take this side and go down from the bridge,” he said, gesturing across the Tigris to the Green Zone. “There is the Iraqi parliament, right there.”

“There are so many particular problems in Iraq and the solution is on the other side [of the Tigris]. So we want to take this area.”