Algerian President, Abdelaziz Bouteflika, announced his resignation prompting jubilation in Algiers but many say they will continue to protest against government.

Algiers, Algeria – “I am super happy and excited. We have won a battle. This will be a sleepless night”, Bilal, a 27-year-old carpenter, told Al Jazeera in downtown Algiers as he and thousands of other Algerians celebrated President Abdelaziz Bouteflika’s resignation.

The ailing, 82-year-old leader announced he was stepping down with immediate effect in a letter published by state-run APS news agency on Tuesday, just hours after the army chief demanded action to remove him from office.

“My intention … is to contribute to calming down the souls and minds of the citizens so that they can collectively take Algeria to the better future they aspire to,” Bouteflika said in the letter to the president of the Constitutional Council.

“I have made this decision to avoid and prevent the arguments which distort, unfortunately, the current situation, and avoid its turning into serious skirmishes, to ensure the protection of persons and property,” he added.

Under the capital’s Tunnel des Facultes that leads to Maurice Audin square, a jubilant group of protesters, some draped in the national flag, jumped up and down with excitement while singing “the country is ours and we’ll do what we want”. Others set off fireworks at the entrance of the tunnel. 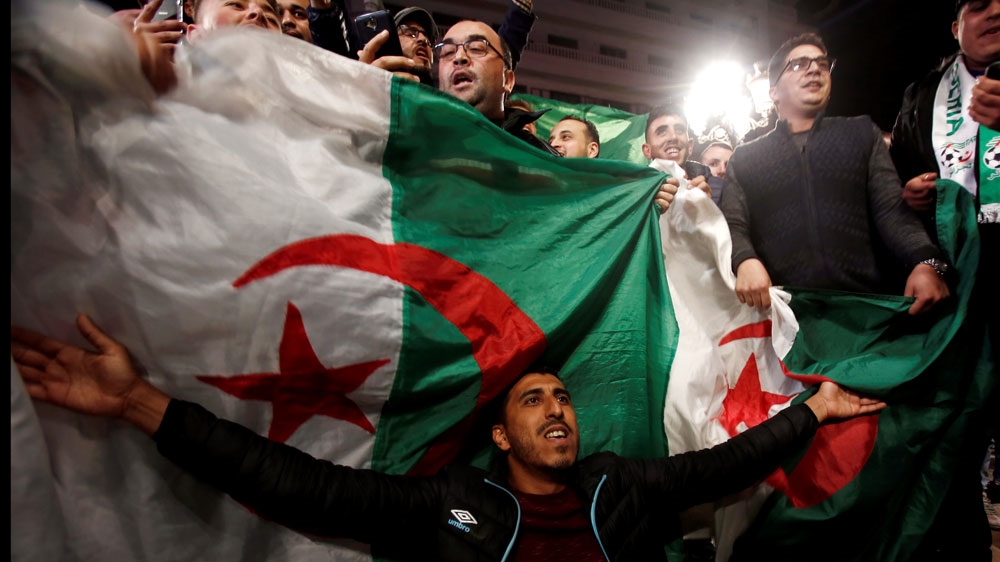 Standing near a plaque dedicated to Audin, a French anti-colonial activist during Algeria’s Liberation war, Youcef, a 26-year-old video editor, said he believed that Bouteflika’s dismissal marked the beginning of a new era in the North African country.

“It is the first day of a new life for the Algerian people. April 2 will be a red-letter day in Algeria’s history, such as July 5”, Youcef told Al Jazeera, referring to the country’s Independence Day.

Farida, a 23-year-old mathematics student, who was heading to central Algiers with her 3-year-old daughter, agreed.

“This feels new. We are experiencing an exciting and historical moment. My generation has grown up only knowing one president our whole life.”

“We’ve had enough. We were desperately waiting for a change,” said Farida, adding that she had been involved in the protest movement since it broke out on February 22.

Similarly, Brahim, a 36-year-old law professor, believed that Algeria had reached a turning point, comparing the end of President Bouteflika’s 20-year rule, the longest in the country’s history, to France’s defeat in the War of Independence in 1962.

“This looks like Algeria’s second Independence Day. We will liberate our country of a mafia that has been ruling it over the past two decades like our elders stood against the French colonial system during the 1960s”, Brahim told Al Jazeera as convoys of cars drove alongside Algiers’ busy Didouche Mourad street.

Like many of those celebrating, Badis, a 35-year-old entrepreneur, described Bouteflika’s departure as a “great victory for the Algerian people”.

“We can be proud of ourselves, what we achieved is incredible,” Badis said, adding that, while cautious, he still feels optimistic.

“It is not over yet. We need more, we need to launch a transition process,” he added.

Bilal, the carpenter, agreed. “The people’s uprising has borne fruit. We did not take the street five weeks in a row for nothing,” he said while waving his Algerian flag.

Nearby, a group of young Algerians, climbed on top of their stationary cars’ roofs, chanting La Casa Del Mouradia, a song written by Ouled El Bahdja, which has become the most popular anthem of the protest movement against Bouteflika’s administration.

Close by, another group of young people made V signs to indicate victory.

“It is a combination of emotions. I am happy and sad at the same time. It is a miserable ending for Abdelaziz Bouteflika. He is going out through the side door,” Meriem told Al Jazeera.

She looked at footage on her phone showing Bouteflika, dressed in a beige North African tunic, sitting in his wheelchair while handing his resignation letter to the head of the constitutional council, Tayeb Belaiz.

“He should have left after the end of second term in 2009. We would have been grateful towards what he accomplished. Now we feel nothing than pity for him,” Meriem added.

Like many of those celebrating, Meriem said that she would demonstrate again next Friday to demand a “real change”.

“We want a complete overhaul of the leadership, which has clung to power over the past two decades. We will continue to put pressure on the authorities until Bouteflika’s clique leave the power,” she said.

For Farida, the resignation of Bouteflika was “not enough”.

“His removal is only the first step. We will keep marching until we have fair, transparent elections and a new government because the cabinet led by Noureddine Bedoui does not represent us.

“We don’t want the old guard to interfere in the transition process”, she said, while calling for the enforcement of Article 7 of the Constitution that stipulates that “the people is the source of power”.